How Freelancers Can Create Their Own ‘Snow Fall’ for Free

The story won a Peabody award for its “spectacular realization of digital storytelling.” The author, John Branch, received a Pulitzer.

But while the story and its implications were thrilling for publications with big budgets and design teams, many freelancers felt left out in the cold.

After all, when you’re a one-person team, putting together a gorgeous multimedia piece is pretty hard—and if you don’t know how to code or design, it’s impossible.

But Atavist, a publishing platform and magazine, is trying to change that. In March 2015, it launched the newest version of its content management system. While the old version of the platform operated using WordPress-esque templates, the newest version gives users far more creative freedom. Put simply, it’s like Squarespace for longform stories, allowing you to drag and drop various elements like you were building an article with LEGO blocks.

Beyond the various media types Atavist supports (Twitter, Vimeo, YouTube, and SoundCloud, to name a few), you can also add custom interactive charts, maps, images, and even parallax effects. On top of that, Atavist has the unique feature of allowing creators to easily monetize their content. In other words, creating longform multimedia stories isn’t just a team sport anymore.

Atavist isn’t the only self-publishing platform available. It’s not even the only free, minimalistic, and elegant self-publishing platform available. However, while competitors such as Medium, LinkedIn, Svtble, Ghost, and Tumblr allow you to incorporate media, your options are usually limited to text blocks interrupted by a photo or video. Atavist tries to offer far more creative freedom.

“I love how easy it is to use,” said Luc Forysth, a photojournalist and writer. “The interface is very intuitive and visual—you can make it look how you want without any knowledge of coding.”

If you didn’t see the URL, which includes “atavist,” you’d have no idea you were reading a self-published piece rather than one from a professional publication.

The same holds true for Catalina Gaitan’s longform story about changing transgender rights in Massachusetts, “A State in Transition.” Like Forsyth, Gaitan incorporated videos, images, and pull quotes into her text.

“I tried out a few platforms,” Gaitan said. “Atavist fell right in the middle between too simple and too complicated.”

According to Kathleen Ross, head of product communications for Atavist, around 72,000 people have created accounts so far.

The feature that most sets Atavist apart from its competition is the optional paywall, which allows you to either sell individual pieces or subscriptions.

If you opt for the first option, your stories will be displayed like traditional e-commerce products. They’ll each get a customizable “preview” page, with a cover photo, a description, and an option to purchase access using a credit card.

You can also sell subscriptions as an alternative. You can give your subscribers access to every story you publish within a set time frame, or sell “all-access passes” for past, current, and even future content. 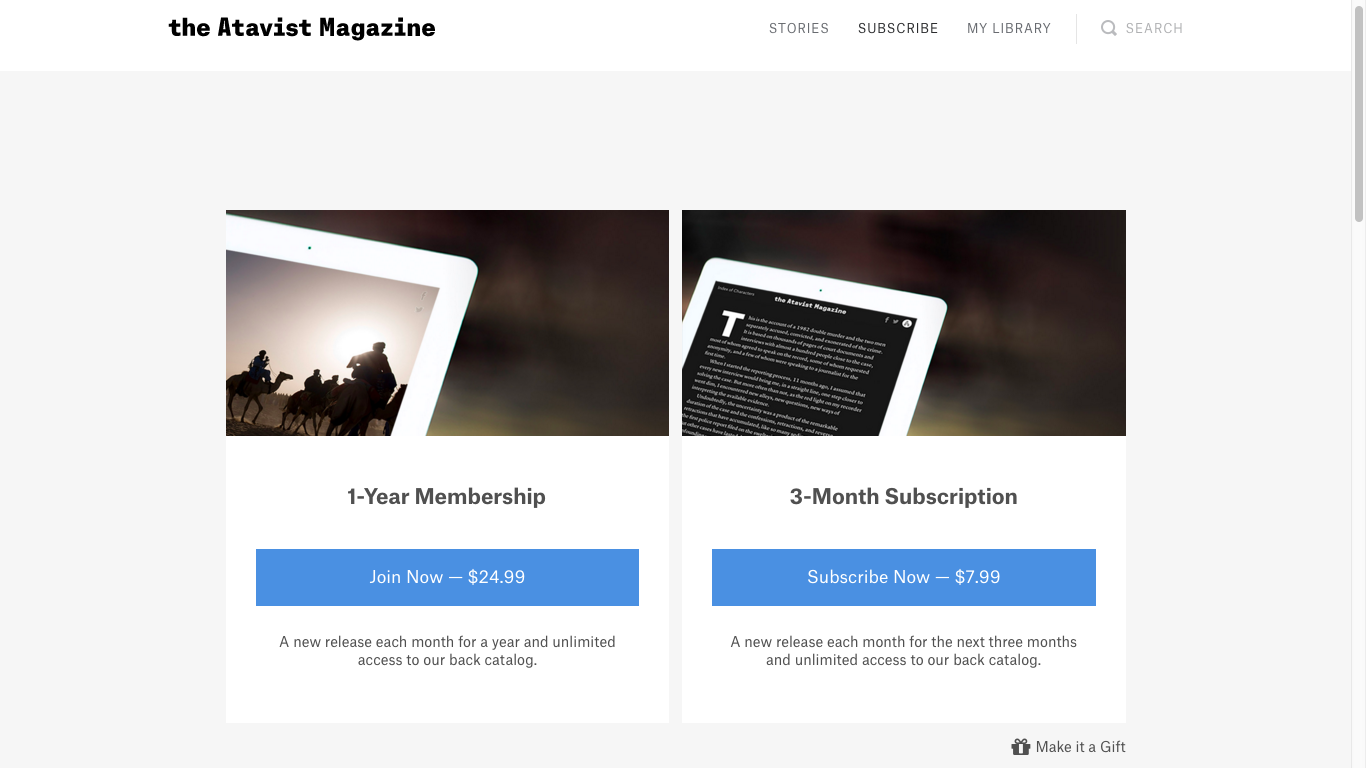 In theory, these paywall settings enable you to become your own, monetized publication—a huge deal for freelancers previously reliant on payment platforms or selling advertising on personal blogs for monetizing their self-published work.

Unfortunately, most freelancers probably won’t be able to generate much revenue with Atavist’s current pricing plans.

While a free account offers all of the same media tools as the least expensive paid account, it doesn’t come with a paywall feature. In other words, if you want to sell your content, you’ll need to opt for Pro, which currently runs at $8 per month.

Ross said per-piece pricing options for selling your content range from $0.99 and $19.99. From each transaction, you’ll lose 2.9 percent plus $0.30 in credit card processing fees; after that, Atavist takes 20 percent.

Forysth and Gaitan aren’t bothered by this, however.

“I don’t really believe in paywalls,” Forsyth said. “I have the work I do for clients, which is paid, and then I have personal projects, which I want to be accessible and available to anyone who wants to read them.”

Gaitan’s story about Massachusetts’s gender law was free. She said she’d consider charging for a story in the future—“maybe like ten cents.”

However, assuming the current pricing rules don’t change, 10 cents would be outside the acceptable range. Though considering the spread of micro-payments for news, don’t be surprised to see Atavist implement smaller payment options.

How journalists have used it so far

While Atavist’s software might not be your ticket to retirement, journalists have found some interesting applications for the platform.

Liz Spear, a reporter, has been producing local news stories for a series called “Inside Manhattan Beach.” Kristan Uhlenbrock used Atavist to publish “Jellies of the Damariscotta,” a story that fuses personal narrative, science writing, and mystery.

There are longform pieces about food, corporate espionage, travel and culture, and social issues. One writer even created a 90-page, multi-chapter account of paying off his student debt. 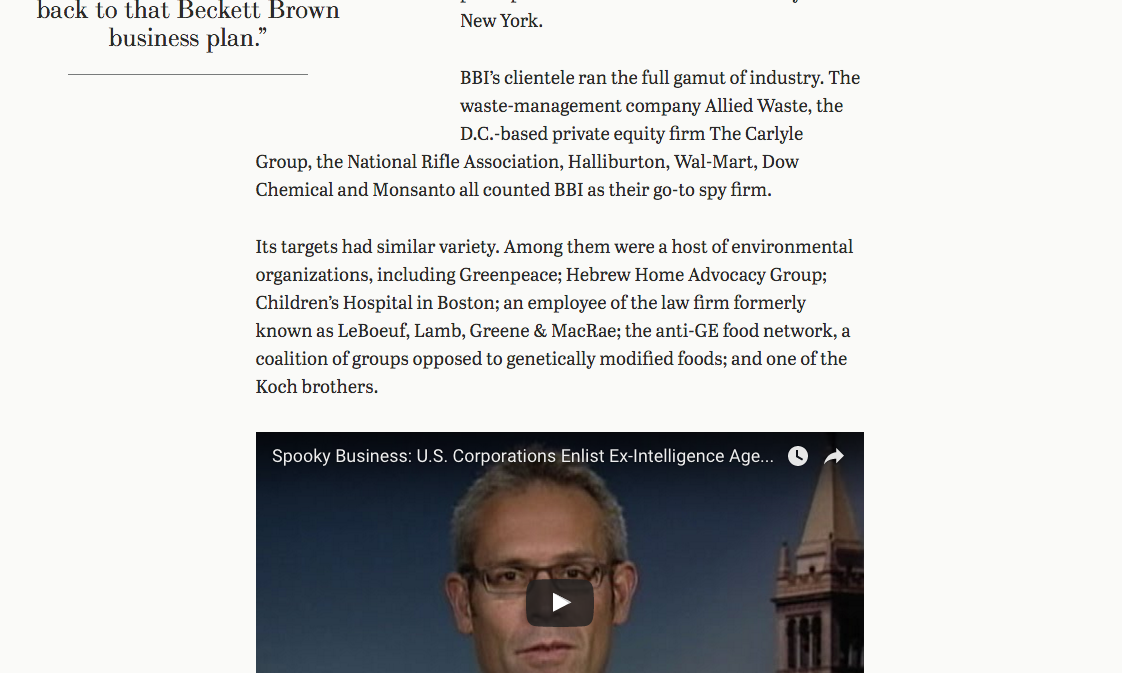 It’s obvious that many of these writers are using Atavist to publish their labors of love or dive into topics that might not align with standard publications. Notably, none of these stories had paywalls.

Ross also recommended using the platform as a pitching strategy.

“We have a lot of big-name publications using Atavist to publish one-off stories: Latterly, Crosscut, Mental Floss, the Pulitzer Center, and more,” she said. “If you can show those publications that you’re familiar with the CMS they use, that’s pretty powerful.”

And for the publications—like The New York Times—that don’t use Atavist? Well, showing them that you’re capable of “Snow Fall”-esque work is probably pretty powerful too.

Ross said there are many exciting updates coming to the platform in the next six months.

Second, users will have the option of inviting third parties to contribute to their publications. You’ll be able to act as a content curator and editor. This addition means producing your own publication will be even easier.

Finally, Atavist will unveil a new type of homepage featuring collections of your published content.

It’ll be interesting to see if any freelancers are able to come up with a way to make significant money on Atavist. Meanwhile, it’s a great option for publishing multimedia pieces you might not otherwise have the chance to write.

How I Bounced Back From the Brink of Pandemic Burnout