Coffee (the App): Like Tinder… but for Job Networking

I’d like to introduce you to the love child of Tinder and LinkedIn: Coffee.

While many of us think of going through the typical networking motions—handing out résumés at a career fair to employers who aren’t hiring—Coffee makes networking almost a game-like experience that only requires swiping your thumb left or right to connect with other professionals.

Within a week, I had used the new app to connect with a freelance photographer living in Brooklyn, a videographer/writer from Austin, and a sales development associate at Tumblr.

The idea came about after Bernard and CCO Sawyer Xie graduated from Boston University and saw many of their friends struggling to find jobs or internships that could jumpstart their careers. One day, as Bernard was using Tinder, he had a conversation with an investment banker who said she lacked the time to meet other young professionals in New York City.

The conversation concluded with the idea that it would be useful to build an app with a similar interface to Tinder, but one that was dedicated to networking instead of hooking up. The app was launched July 8, 2014, and has now become not only a place to network, but also a platform that hiring managers are using to find potential employees.

Three months after its launch, the app now has over 6,000 job seekers and over 400 hiring managers waiting to be matched. According to Bernard, matches are a better metric for the app’s success; right now, they’re averaging 450 a day.

Who has benefited from these connections? According to Bernard, UI/UX designers have landed freelancer work, New York City startups have recruited interns, and one woman was recently hired by PricewaterhouseCoopers after connecting with someone from their mergers and acquisitions division.

Rob Soofian, chief executive of Specster, told The Boston Globe it’s been hard to find the right job candidates using traditional methods. “I would get many different candidates that weren’t right for the job,” he said. “With Coffee, it was easy to get people who were engrossed in the startup world.” 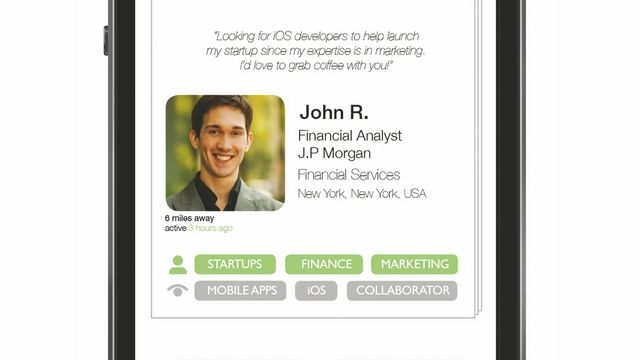 Bernard also pointed out that journalists have been able to get stories and ideas through the app. I’ve been using it to connect with members of the tech industry in New York City. And since your matches aren’t limited by location, you have the opportunity to connect remotely with people in your industry who live far away.

Coffee doesn’t have an official job marketplace—all openings and hirings are handled offline, but Bernard said the creators plan to make it a feature in the future. “We’re building a web app for hiring managers so that they can put job postings directly onto the application, still represented by a person, but with a notation on the card that says this person can offer you a job.” The notation will include a salary and a brief description of the job.

Tinder, which started in August of 2012, reached 1 million matches in 2013 and had surpassed 1 billion matches by March 2014. It’s very possible Coffee can work its way to those numbers, as long as people like getting hired as much as they like hooking up.

How to Break Into Freelance Ghostwriting