It’s easy to fall into the trap of thinking location doesn’t matter for freelancers. After all, you’re not exactly tied to a single business, and most of your time will probably be spent online anyway. Shouldn’t work be just as easy anywhere in the country–or anywhere in the world for that matter?

Well, no. Not according to a new list by Zen99, a ​company that provides tax and insurance tools for freelancers, which ranked the 50 best cities in the United States for freelancing. As one might expect, the benefits and ease of freelancing can differ greatly depending on location.

The percentage of independent workers already working in a city accounts for half of the study’s grading system—the thought process being a higher concentration of freelancers correlates to established infrastructure (coffee shops, coworking spaces, etc.) and opportunities (jobs, meet-ups, etc.) needed to work and network. Rounding out the study: Housing affordability counts for 20 percent of the grade, health insurance 15 percent, and unemployment rates 15 percent.

A separate study published earlier this year by NerdWallet worked off a similar calculation for their Top 20 list, although without unemployment rates factored in and with more of a focus on housing and health insurance.

In both studies, Los Angeles came out on top. Surprised? For comparison, New York City came in at a measly 46th in Zen99’s study and didn’t even appear on NerdWallet’s list. 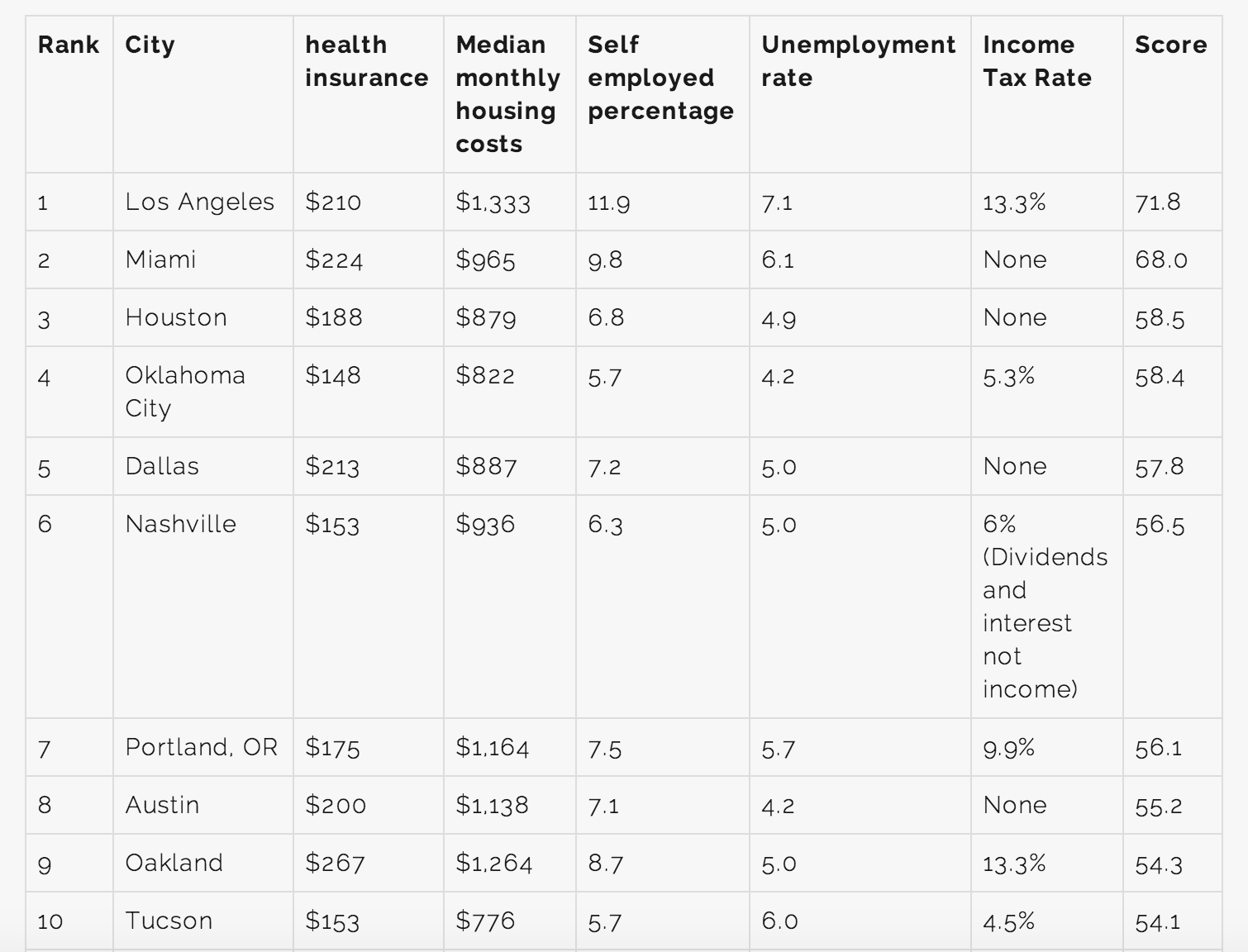 Zen99’s top 10 from their Best 50 Cities for Independent Workers.

So why Los Angeles? In Zen99’s calculations, the city’s health insurance isn’t the most affordable on the list, and with median housing expenses at $1,333/month, it actually has some of the highest median monthly housing costs on the list. Additionally, it’s unemployment rate is above the U.S. average. So what gives?

Simply put, Los Angeles is home to the most freelancers in the country. A whopping 17.9 percent of L.A. households reported self-employment income in 2012, according to NerdWallet. It’s worth pointing out Zen99 lists the city’s freelancer population at 11.9 percent due to different criteria for what it means to be self-employed. Odds are, the true figure is somewhere between the two figures. Regardless, both would agree L.A. has a significant freelance community. Maybe it’s the warm weather, or more likely, as NerdWallet points out, it’s the movie industry. With all the indie filmmakers, screenwriters, actors, and production assistants, freelance labor makes up a huge part of the Hollywood machine.

The interesting caveat with any data about the self-employed is freelancers are not all cut from the same cloth. For example, if you’re not in film, and you don’t have a lot of disposable income to spend on housing and insurance, then Los Angeles might not be the place for you. The freelance economy is growing rapidly, and it’s amazingly varied. If it was ever simple to lump freelancers together under one roof, it’s certainly not possible anymore. 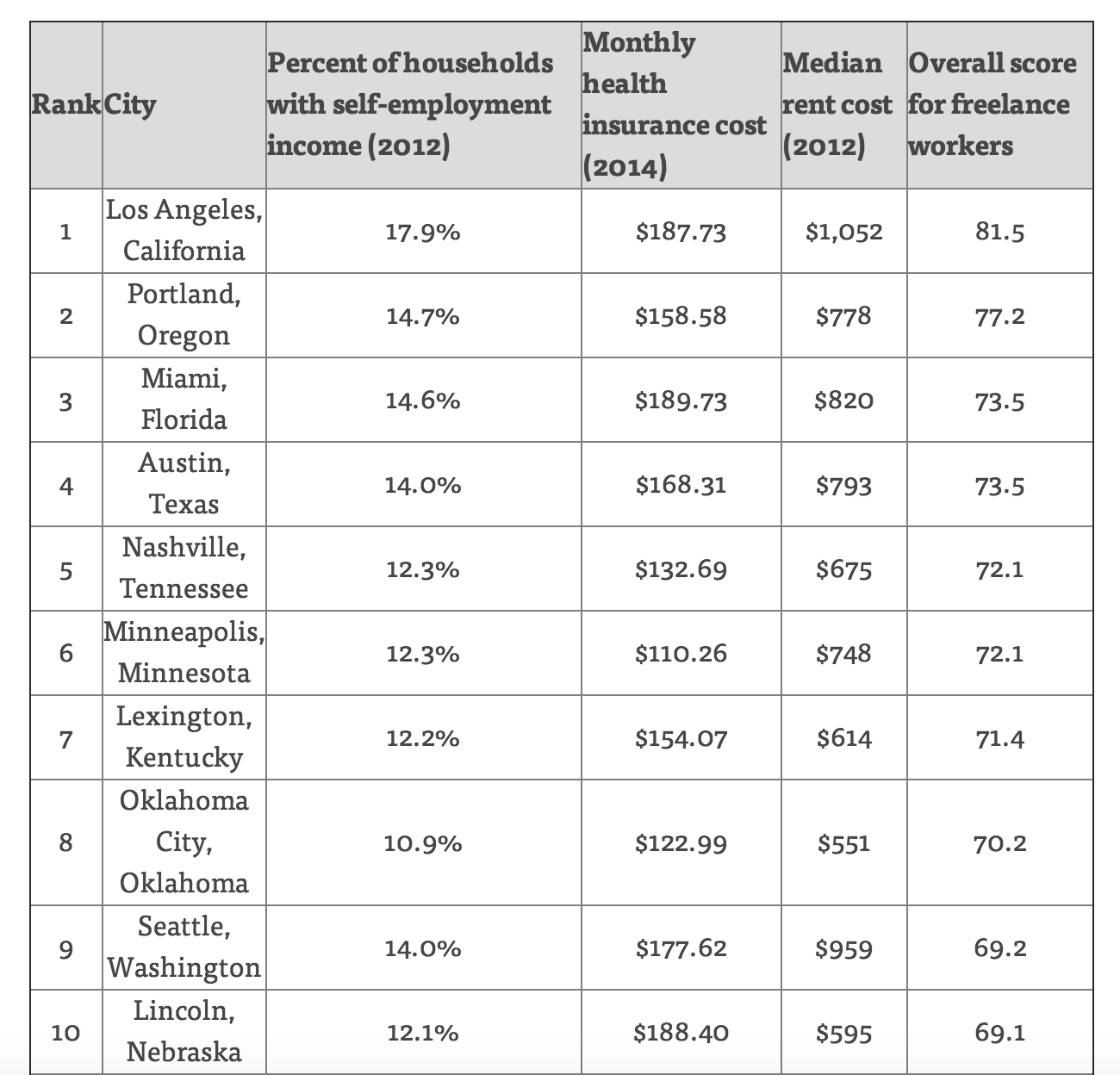 NerdWallet’s top 10 from their Best Cities for Freelance Workers.

On the positive side, there are plenty of other viable options besides Los Angeles for those not in the film industry.

Rounding out the Top 10 in Zen99’s study are a lot of Southern and Western cities, including Miami, Houston, Oklahoma City, Dallas, Nashville, Portland, Austin, Oakland, and Tucson.

NerdWallet, meanwhile, gives props to Portland, Miami, Austin, Nashville, Minneapolis, Lexington, Oklahoma City, Seattle, and Lincoln. Amazingly, there isn’t even one Northeastern city in their top 20. Zen99 doesn’t include one until Philadelphia at 44.

If there’s any one takeaway from these studies, it’s that Horace Greeley was right all along: Go West, young freelancer.