Pittsburgh is on the small, spunky side—the City of Bridges has just over 300,000 people, while significantly more live in nearby suburbs. And this Rust Belter is on the upswing; for proof, look no further than its growing tech and environmental industries, influx of millennials, and multiple Most Livable City victories.

For this Pittsburgh installment of our ranking of the best coffee shops for freelancers, I paid special attention to those joints that both were conducive to getting work done and, in true Yinzer style, made you feel at home while you did it. I opened my laptop and ordered a cuppa in over a dozen shops around the city, from the Southside to Squirrel Hill, from Lawrenceville to the South Hills, and made my divine judgment as follows. Most of the ranking criteria carry over from our previous rankings.

I used and tested the free WiFi at every place we went to, and if shops had sluggish connections or capped your time, they got chopped. Having plenty of outlets and ample, comfortable seating space were two other musts, and proper lighting proved critical. In terms of music, the tunes and volume tended to be consistently great, so that factor didn’t impact the rankings all that much.

Quality food and drinks obviously determined a lot, as freelancers expect to spend a solid amount of their time camped out, so I paid great attention to variety and affordability. And, most importantly for that uniquely Pittsburgh experience, I looked for friendly atmospheres in which the baristas and fellow patrons contributed to a productive space.

Here are my five favorites, presented in alphabetical order.

Conveniently named after its address, 4121 Main is a visual creative’s dream. The coffee shop is housed in a 1920s era home-turned-real life Pinterest board, where consumers can sip a carefully crafted drink while working in the gorgeously bright, open space. 4121 uses Heart Coffee from Portland, OR, and a hand-crafted Dutch espresso machine for optimum beverage experience. Floral arrangements and the carefully curated art pieces are even available to take home after your visit. Carnegie Coffee Company took over the space of the old Carnegie Post Office in 2013—and space it has. The positively roomy and incredibly bright shop boasts countless nooks, crannies, and tables of all sizes, including a full conference table in the back of the loft area. It no doubt gets busy around lunch since the Company sells homemade soups and sandwiches, baked goods, and a great selection of drinks right behind a counter made out of the old post office’s lockboxes. But if you can get a spot, this is the sort of place to get comfy and stay awhile. 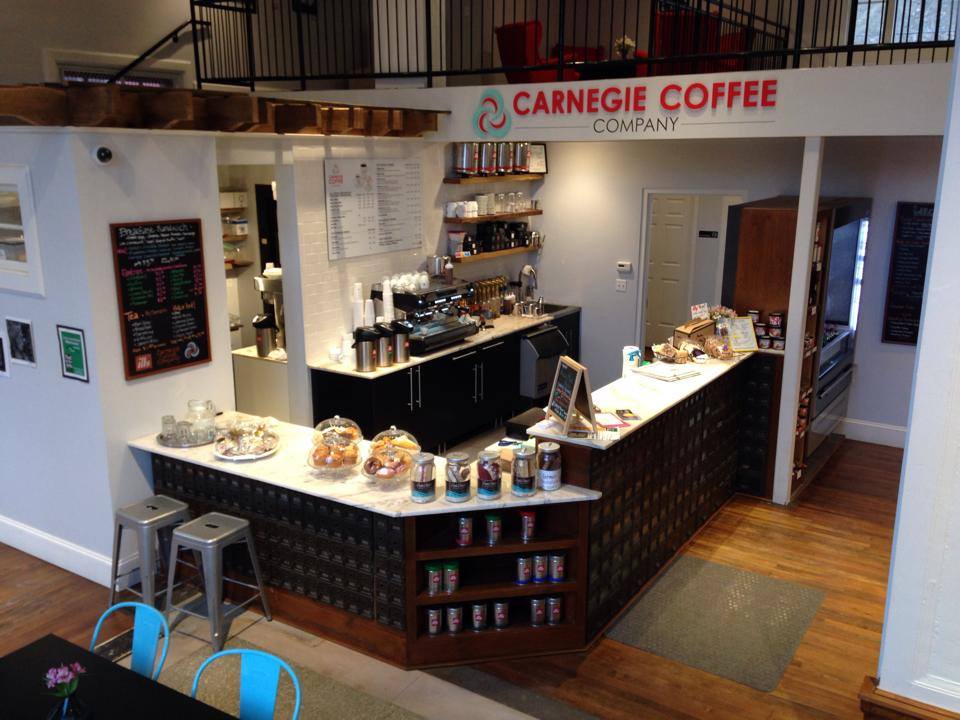 Probably the most hip of these favorites, Delanie’s occupies a prime location in the bustling Southside, surrounded by restaurants, shops, bars, and young people aplenty. In the middle of the day, it’s pretty busy downstairs, with cheerful conversation and whatever the baristas decide to put on the speakers (I enjoyed their abrupt change from punk to Sam Cooke). But in the loft area, with paintings and photographs from local artists and students hanging on the exposed brick, everyone was typing away. The coffee was some of the most reasonably priced I came across, and I was more than tempted by their build-your-own breakfast sandwich. Sometimes a little liveliness is what you need to get your day going. 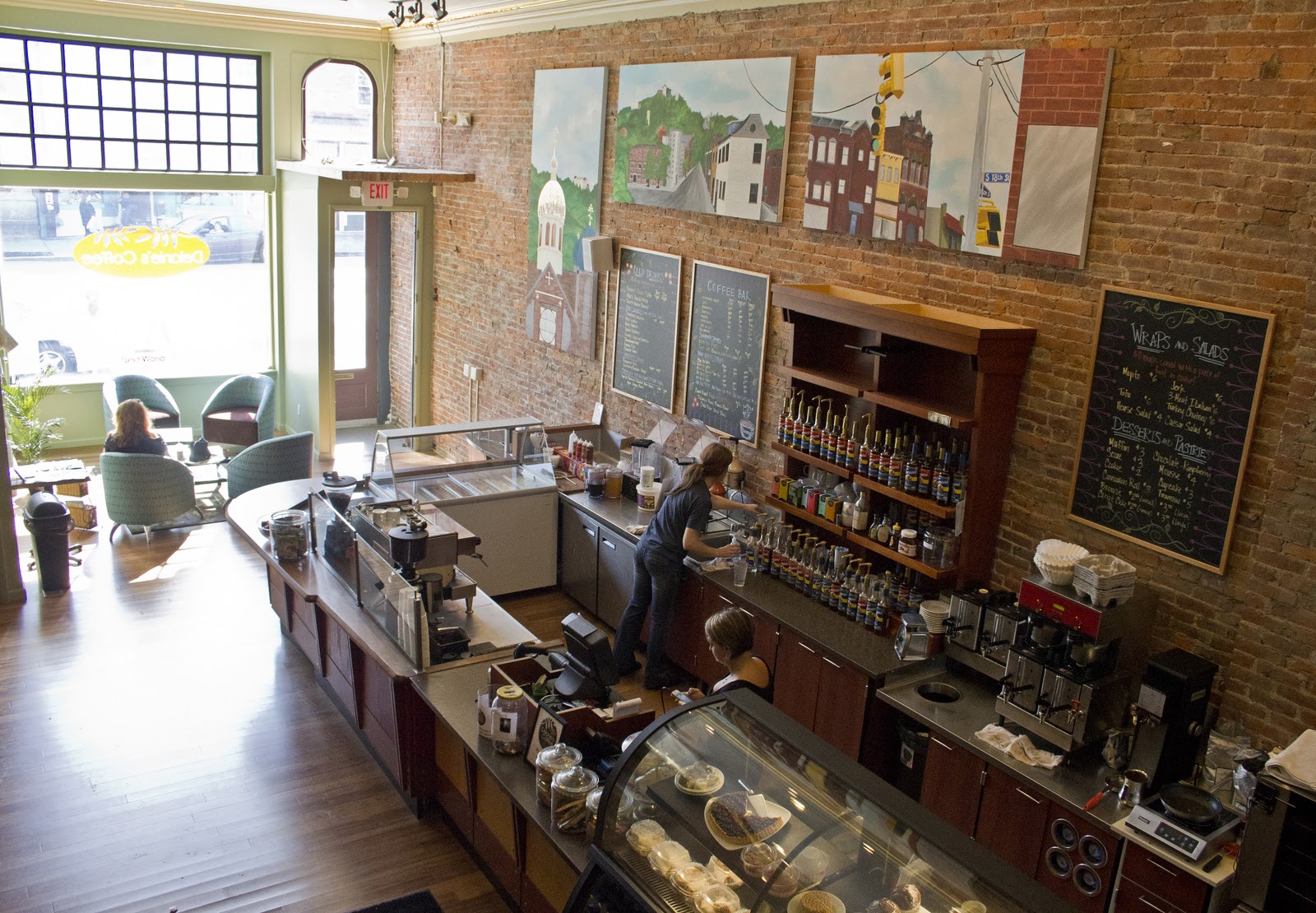 When everyone you see in a coffee shop has a laptop or a tablet open, you know you’ve probably found a good location. On one of the coldest days of the season, I trekked out to Lawrenceville to try what Pittsburgh Magazine called the best latte, and the best latte art, in town. I was not disappointed; Espresso a Mano (“by hand”) really cares about its coffee, and the more sustainably-sourced, the better. Despite the seemingly great work ethic, the baristas were exceptionally friendly and people struck up conversations here and there. Though a small draft in the building was not ideal after walking through the snow, on nice days, the shop opens up its garage-door front and lets in the warmth of the sun. 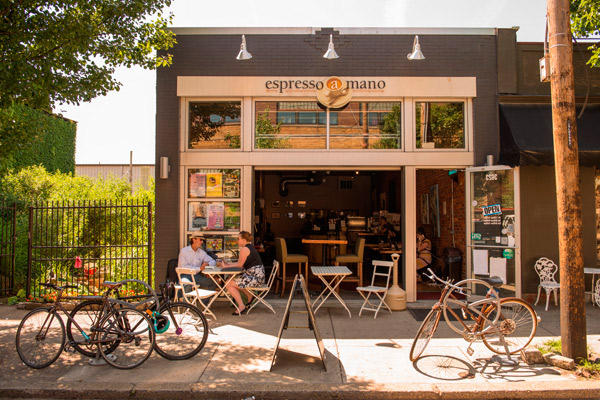 Okay, okay, hear me out. While not technically a coffee shop, Squirrel Hill’s bright and peaceful Té Café quickly found my heart as the most relaxed joint in the neighborhood. The owners know tea like nothing else, and they have pots of loose leaf for your every need. Feeling sick? Feeling tired? Feeling cold? Feeling hot? They’ve got tea—green, black, white, oolong, herbal rooibos—for that, by the cup or by the pot, which you can refill to infinity, and with more leaves on the side. You can theoretically stick around for hours on the same pot, getting work done and staying warm, which sounds like a pretty nice day to me. Not in the mood for tea? They’ll make anything into a latte, or serve you multiple kinds of hot chocolates, any smoothie imaginable, and, yes, a good old-fashioned cup of coffee. Know what hot tea-mulled apple cider is? You should, it’s delicious. A counter full of outlets and music from the local public radio station just seals the deal. 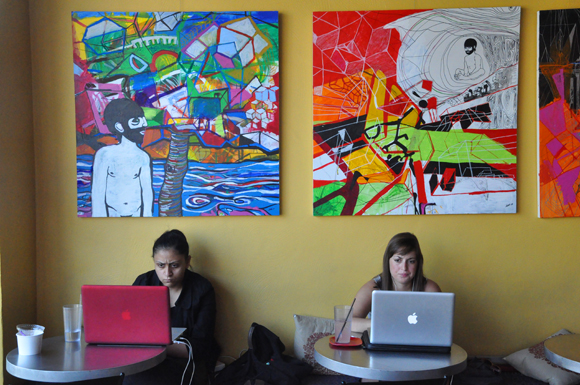 Think there are any great coffee shops we missed? Let us know @TheFreelancer on Twitter.