Video Is Set to Dominate the Internet by 2018—so What the Hell Should Writers Do?

Most people making predictions about the future of content expect video to thoroughly dominate the Internet in the coming years. In a 2014 report, for example, Cisco estimated that video will account for 79 percent of all consumer traffic by 2018.

But what exactly does that mean for writers?

Even though we may be in the midst of a digital video explosion, there will still be plenty of opportunities for freelance writers. Those opportunities, however, will only be available to those who adapt in the next few years. And for freelancers trying to stay ahead of the competition, the key will be turning their articles into scripts for brands and media companies.

For writers who hope to break into this growing market, there’s good news: Journalists have an advantage. The basic editorial procedures of interviewing, researching, writing, iterating, and proofing still apply. So if you’re interested in giving scriptwriting a test drive, we’ve outlined the process of making the transition.

Where should you start?

As a freelance writer, I keep an archive of every story I’ve authored; most fall between 700 and 1,000 words. But when I was working on my first script for a publisher’s internal creative studio, I had to do a hard edit of an article I’d written about a fashion designer even though it had already been published.

Why? Because the average digital video is 4 minutes and 24 seconds, per comScore, so whatever copy you wrote before will need to be reworked to fit a visual medium, especially for lengthy articles. To try to get a sense of how one of your articles will translate to video, I recommend using a words-to-minutes calculator. How much scripting you’ll have to do will depend on the project, but the calculator I use makes the assumption that people will talk at an average of 130 words per minute.

To get a sense of how this looks, let’s use Superpower for Hire, a short documentary video that covers the rise of private militaries, as an example. The clip was produced by Vice and the video game franchise Call of Duty. And at 3 minutes and 41 seconds, its script would call for approximately 550 words.

I’m not legally permitted to disclose information about the video I scripted for a fashion advertiser—otherwise, I would use that instead. But I can tell you that just trying to adapt a piece of your own work to a new medium takes a lot of practice. Just getting comfortable with the cadence and visual components requires a slightly different mindset than strict reporting, so I’d recommend doing some research before jumping in headfirst.

Once I finally grasped how to trim my own work, I realized I didn’t know how to format a standard script, either. That’s when the director of the fashion project introduced me to the table. It was time to reconnect with rows and columns from my college days of Microsoft Excel. Think of the standard script as an article that gets sliced into chapters, soundbites, and pull quotes.

While this is a separate style from traditional scriptwriting for movies or fictional TV shows, it is still built off of a narrative thread. Every video requires columns that break down the visuals and audio. Some video scripts have a third column for titles, captions, and text in the lower third of the frame.

The scriptwriter for branded work becomes the lead for the audio column. The director is the lead on the other two columns. Depending on the collaboration, the writer can also offer up ideas for original scenes, B-roll, or infographics that help move the story along.

If we use this format to deconstruct the video from Vice and Call of Duty, a portion of it would look like the table below: 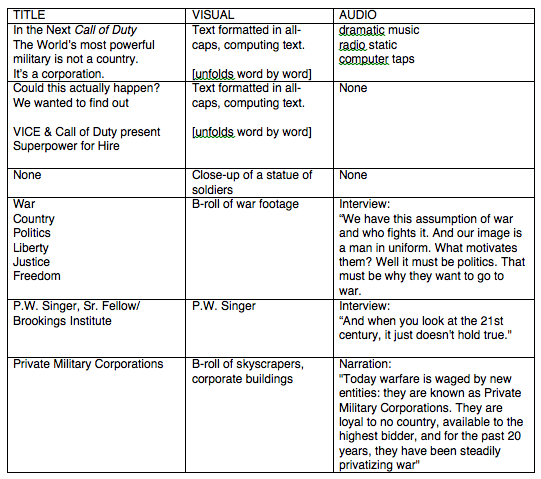 The goal is to clearly communicate the message through a “see and say” story. The visuals drive the story and build anticipation. What we’d consider a pull quote is the first voice and sets the stage—much like the hook or lede. From there, the narrator’s voiceover comes in and supports the rest of the story with sources, data, and additional interviews woven in throughout the piece.

So let’s say you get hired for a project and complete your first script. You structure it properly and adapt one of your earlier articles. Now what?

How do you make the right contacts?

With the demand for video content, there are a number of outlets that could be potential clients, including breaking news organizations, brands, in-house training departments, corporate and public relations teams, educational publishers, agencies, and more.

Instead of a managing editor, you’ll be collaborating with the client, director, producer, and video editor. Establish lasting relationships with these creative partners. Because so many videos are project-based, people often go and in and out of assignments. And since most creatives are jumping around as freelancers, not just writers, your work—at least in the beginning—will hinge a lot on referrals and word of mouth from connections.

One way that’s helped me find top clients is to partner with a director in order to pitch spec work. This strategy helps writers find a creative partner they can trust who shares their unique approach to scripting and production. It also means there are two people pitching work to their respective connections, which increases the potential projects that could come in. I refer my writing clients to my director, and he refers his production clients to me for writing. In the end, we get to team up, and it’s a win-win for both of us.

What rates should you expect?

For me, figuring out the rates was just as much of a learning curve as developing the craft. Rates are really dependent on project budgets, which not only differ from company to company, but also from campaign to campaign. But thus far, I’ve seen a solid mid-level rate for freelance scriptwriters.

If you look online for a benchmark, you will find that $40 per hour for a freelance role is a good starting rate for digital scriptwriting. For my own work, I charge $75 per hour based on category experience, so on a recent 15-hour project, I earned $1,125, almost twice the average rate. The payday is certainly worth the time and effort it takes to do the reporting, editing, formatting, and collaborating.

For now, video writing is in demand because it’s such a specialized skill. The specialty lies in being able to reframe editorial stories into narrative voiceovers for videos, and experienced journalists have the training to do this best. That’s why writers who know website editors or digital marketers are tackling more and more video work in 2015 and beyond.

Considering that video production is set to really take off in the next few years, now is the time to think about getting involved.