The 9 Most Important Takeaways From Freelancers Union’s Annual Survey

Whether you moonlight or work as an independent contractor, freelancing isn’t easy. But if you’re like the thousands of freelancers who responded to the “Freelancing in America” survey, you enjoy the freelance lifestyle, despite its many challenges.

The survey, conducted by Edelman Berland and commissioned by freelance platform Upwork (formerly Elance-oDesk) and Freelancers Union, offers insights on the state of freelancing in 2015 from a pool of 7,107 people who have completed paid freelance work in the last year. It defines freelancers as those engaged in supplemental, temporary, or project- and contract-based work, and breaks freelancers down into more granular categories: independent contractors, moonlighters, diversified workers (people who are both “traditional employers and freelance workers,” like someone working a part-time desk job while writing on their off-time), temporary workers, and freelance business owners.

For your reading pleasure, we broke down the report into the nine most important takeways for freelancers. We also spoke with Stephane Kasriel, CEO of Upwork, and Sara Horowitz, founder and executive director of Freelancers Union, for their insight into the future of freelancing.

(Editor’s note: Keep in mind that Freelancers Union and Upwork have an incentive to paint a certain kind of picture of the state of freelancing.)

1. Freelancing is still popular, but is growing only among “diversified workers” 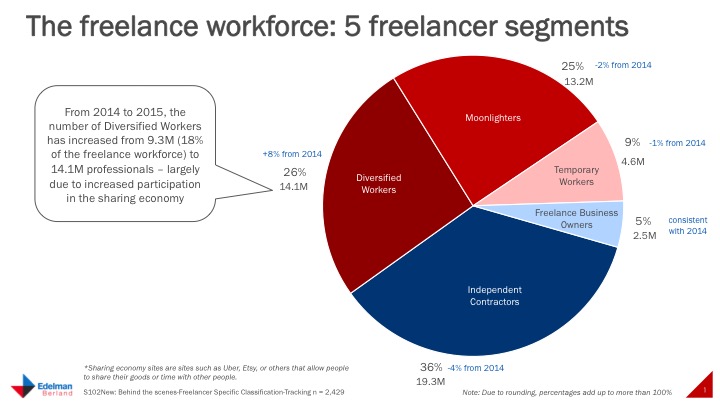 Approximately one in three Americans is freelancing, about the same as last year. The Bureau of Labor Statistics estimates that there are 157 million Americans in the civilian work force, which means that 53.7 million are freelancers or have done freelance work in the past year. The number of freelancers increased by 700,000, in proportion to the overall labor force.

Yet among the five types of freelancers the survey defines, only the “diversified workers” category has grown. The survey attributes that interesting result to the rise of the “sharing economy”—exemplified by platforms like TaskRabbit and, yes, Upwork—but could also, if you’re feeling pessimistic, point to a dearth of full-time opportunities.

2. More freelancers start by choice, and most do it for the flexibility 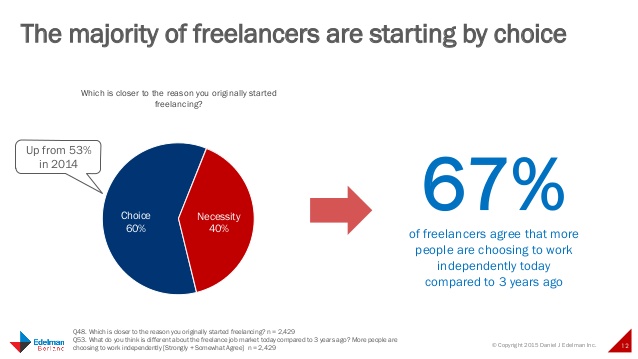 The rise in choice rather than necessity suggests that freelancing has become a more viable career path. Though “necessity” is an unfortunately vague term, its number is still high—though plenty of people choose a career based on necessity rather than choice.

What may be more interesting is why, exactly, people decide to freelance. 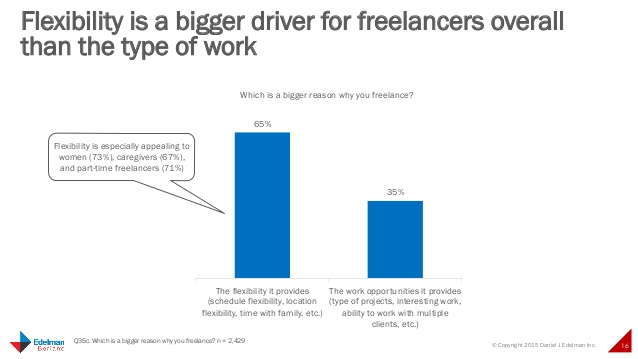 The focus on flexibility is logical, since the ability to set your own schedule is probably the No. 1 advantage freelancing has over full-time salaried work.

3. The majority of freelancers who quit full-time jobs earn more as freelancers 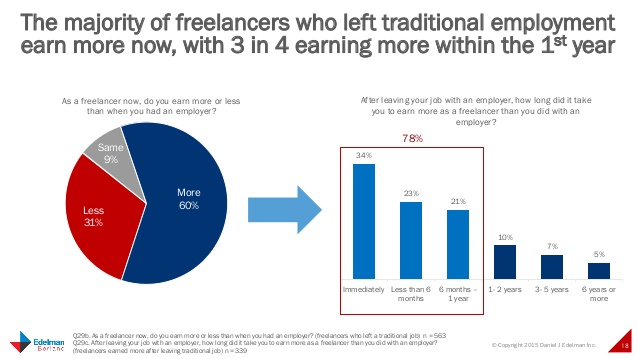 About 60 percent of freelancers who have left traditional employment (about 23 percent of the total) now earn more money. Of those who earn more, 78 percent said that they made more money freelancing within a year or less of starting their business.

4. More than half of freelance jobs are now found online 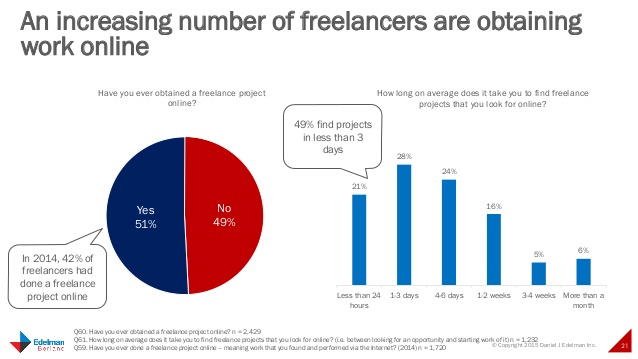 Considering that the world as a whole is slowly migrating online, this shouldn’t come as much of a surprise. If anything, it’s surprising that the number isn’t higher.

Some have argued that online platforms such as Upwork devalue the work of freelancers by flooding the market with more, cheaper options for employers, but it’s hard to deny that these platforms have made work easier. According to the study, about 73 percent of freelancers think technology has made freelancing easier, a 4 percent increase from last year. 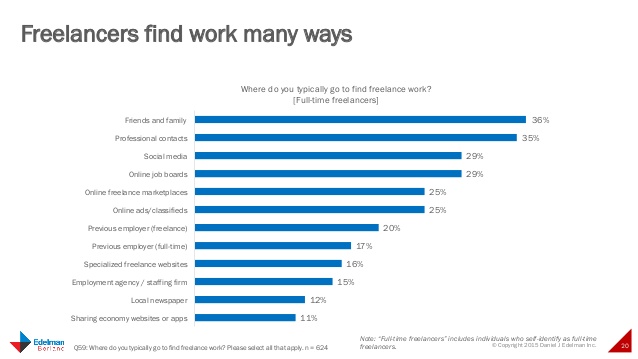 The top three ways freelancers find work are through networking—and the top two of them are all about real-life connections. Make no mistake: If you’re a freelancer, you need to be out wheeling and dealing.

Twenty-nine percent of freelancers go to social media for work, proof that networks like LinkedIn, Twitter, and Facebook are crucial for finding and maintaining connections with other freelancers and potential clients.

6. A large portion of freelancers wouldn’t give up the lifestyle for anything—but many would do it for very little 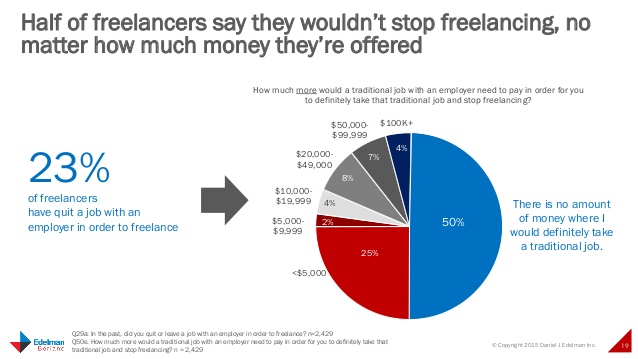 It would be interesting to see how much of that idealistic 50 percent would respond in a real-life situation, but the results are indicative of just how attractive (or necessary) the freelance lifestyle is for many of its practitioners.

7. Freelancers are politically active, and they want to be represented 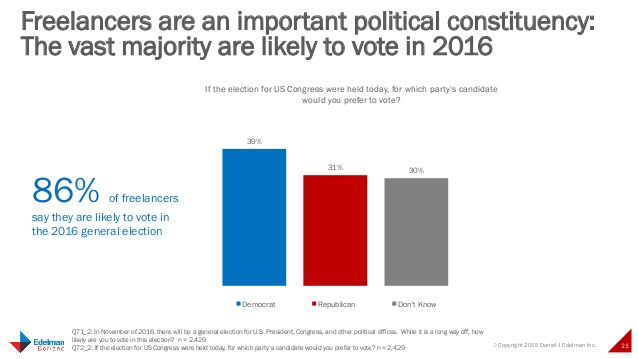 Sixty-two percent say they would be more likely to vote for a candidate that supported their interests as a freelancer. Overall, 63 percent of freelancers think the nation needs to start talking about empowering the freelance segment of the workforce.

8. Freelancers’ top concerns are cost of insurance and income stability 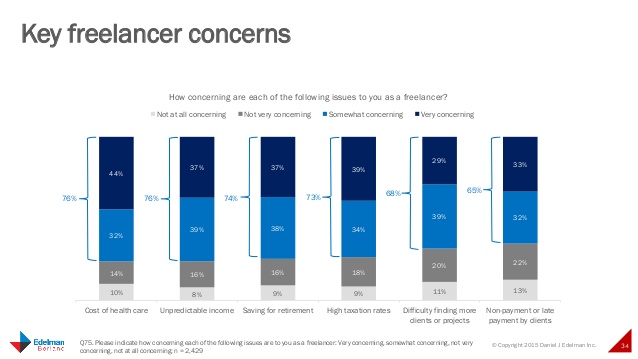 If politicians want freelancers on their side, insurance and income (in)stability—two sides of the same financial-issues coin—are the issues they need to solve.

Freelancers Union tried to solve the insurance problem by offering cheap, freelancer-centric insurance plans, but had to dismantle the program in 2014, citing unsustainable costs increases due to the Affordable Care Act (which some have disputed).

Unpredictable income is something else Freelancers Union has focused on, since 44 percent of its members have reported issues getting paid. Retirement and taxes are other things that, along with insurance, point to perhaps the largest issue freelancing faces: no benefits, and little governmental support. Without traditional programs offered by companies like 401ks, having to pay out of pocket for insurance, and high taxes on the self-employed, freelancers face a lot of financial headaches.

9. Freelancers are optimistic about their future 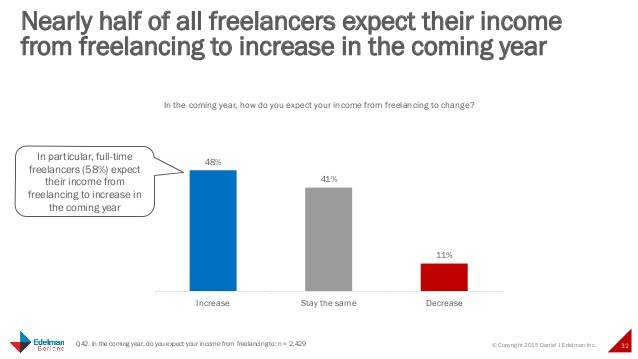 About 83 percent of freelancers say they’re optimistic about freelancing’s future, compared to 77 percent in last year’s survey. Nearly half of freelancers expect their income to increase in the coming year. 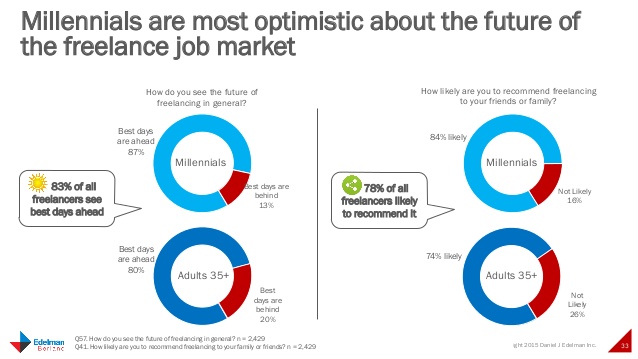 Millennials, in particular, are rather optimistic, and are more likely to recommend freelancing to their peers.

The exact reasons for millennials’ optimism are unknown, but perhaps growing up in an unstable economy—and in a time when freelancing has become more commonplace—has buoyed millennials’ outlook on the gig economy. Or maybe they’re just more optimistic people!

Unsurprisingly, Kasriel and Horowitz are optimistic as well. Both see the business side of freelancing changing a great deal in the near future.

“Being a freelancer is a skill. It includes both being really good at what you do but also running your own business,” Kasriel said. “It’s being really good at marketing yourself and satisfying your clients and generating additional business. That is definitely something that especially new freelancers who are getting started need to get good at.”

Horowitz predicts that as the freelance economy rises, more business and administrative support will emerge in the workforce and in the government. “What we’re looking for is to start to imagine a world and an economy where you don’t have to be great at figuring out how to market yourself, how to do your own benefits, how to figure out your strategies,” she said.

Corporate America isn’t dead just yet, but things are changing. And if those changes allow some of us to work in our pajamas a few days a week, so be it.