If you’re reading this article and you’ve taken the New York City subway at some point during the past month, you’ve probably noticed the Freelancers Union ads blasting companies for failing to pay their independent contractors on time.

Bold, bright, and in a comic-book style, the ads bear confrontational slogans like “Your 90-day pay cycle doesn’t work for my 30-day rent cycle,” and “Funny how corporations are people when it comes to politics, but faceless machines when it comes to paying actual people.” Frankly, they are hard to miss. 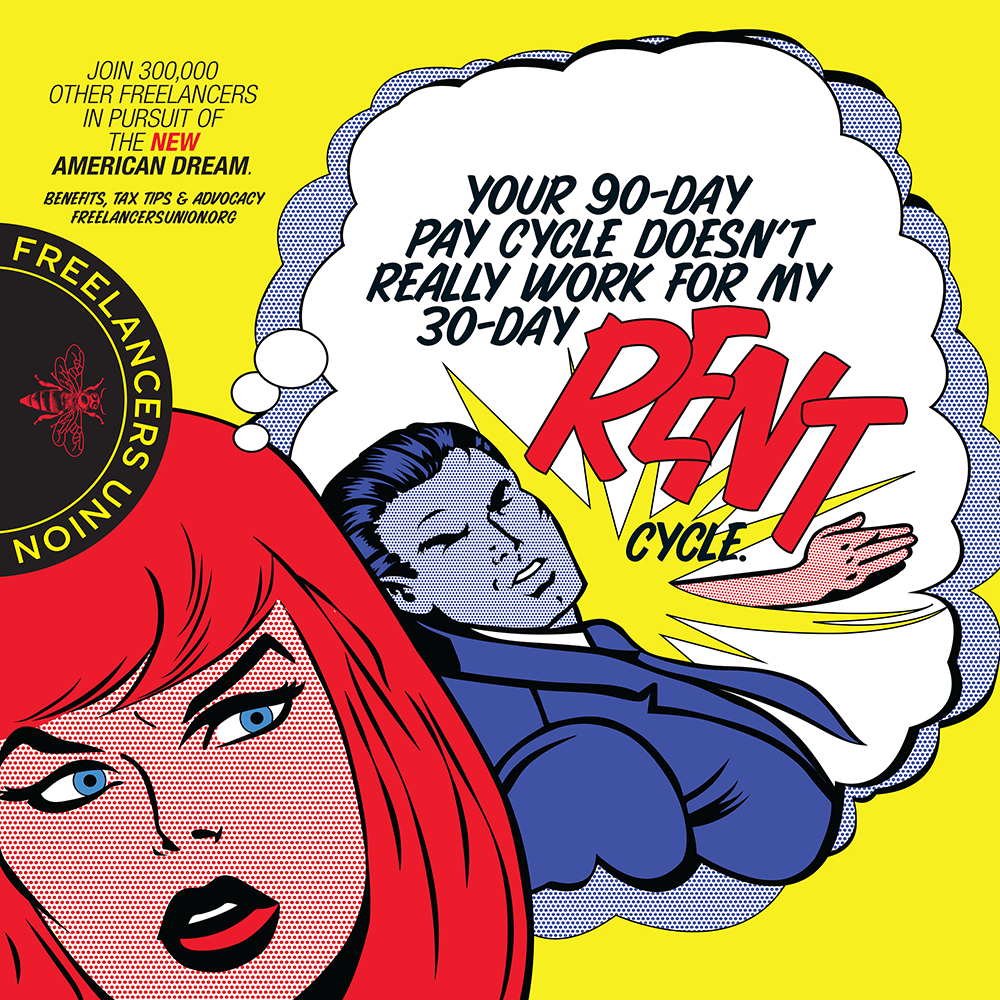 But what you might not know is that these ads are actually part of a larger political campaign aimed at getting freelancers better legal protection against non-payment. So far, the #FreelanceIsntFree campaign has seen Freelancers Union take the concerns of its more than 276,000 members to elected officials on the New York City Council—and even to President Obama.

If Freelancers Union gets it way, companies that use contracted labor will have much greater disincentives against stiffing their freelancers when it’s time to pay up.

“Our hope was to come out with a message that really resonated with freelancers and some of the experiences they’ve had getting paid in a net-90 cycle,” said Caitlin Pearce, associate director of strategic initiatives at Freelancers Union. “It’s not like you can go to [the electric company] Con Edison and say, ‘I’ll get back to you in a few months.'”

Freelancers Union is a collective that seeks to serve as a support system and advocacy group for independent contractors of all types. Unlike a traditional labor union (despite its name, Freelancers Union is not a legally recognized union), the collective does not collect dues or negotiate contracts. Instead, Freelancers Union has focused on connecting freelancers with one another and partnering with insurers to provide health care at affordable rates. Now, political advocacy appears to be taking on renewed importance.

In recent months, the group has been working with NYC council member Brad Lander to pass a law that would make it easier for freelancers to get paid by their clients, an issue it chose to pursue based on feedback from the regular surveys it takes of freelance workers. In one such survey, 77 percent of respondents said they’d had issues with clients withholding money from them, with the average freelancer saying they were unable to collect nearly $6,000 in late payments.

As any freelancer knows, there currently isn’t much you can do to get people to pay on time, or at all.

When I spoke with Steven Warshawsky, a labor attorney in New York City, he explained to me that while full-time employees receive wage-theft protections under state and federal labor laws, freelancers’ relations with their clients are instead governed only by whatever contract the two sides might have agreed to—assuming they agreed to one at all.

When workers are classified as employees, they can seek assistance in recovering wages from their state department of labor. They also enjoy advantages in court that are unavailable to freelancers.

For instance, unlike independent contractors, employees can recover the attorneys’ fees they’ve paid if they win the case. Meanwhile, employers are disincentivized to commit wage theft because they can be required to pay their employees additional money beyond what they originally owed as a penalty for breaking the law.

“That can be important, especially for smaller-value type claims that might not otherwise really be worth spending the money to pursue legally,” Warshawsky said. “The basic rule in New York is that attorneys’ fees are not a part of a breach of contract claim. That would be something the parties would have to agree to in advance as part of their agreement.”

A legistlative push in New York, and then beyond

Freelancers Union believes that now is the perfect time to create legislation that would give independent contractors similar protections. For starters, the organization estimates that freelancers presently make up 34 percent of the American workforce, creating a substantial group of people whose interests politicians will need to keep in mind to remain in office.

Though the group helped introduce a wage-theft protection bill to the New York State senate in 2011, it never received a vote. However, Pearce said Freelancers Union sees New York City as especially ripe for a legislative push due to what it feels is a labor-friendly city council and mayoral office, which enacted a law guaranteeing workers paid sick leave in April of 2014.

The idea is that if it can get a bill passed here, Freelancers Union can use New York City as a model for other municipal-level laws elsewhere in the country.

Though the bill is still being worked on, the primary provision Freelancers Union hopes to get codified is one that would mandate the use of a contract that includes explicit protections against late- and nonpayment when companies work with freelancers. In addition, it would like to see freelancers get the same double damages and attorneys’ fees that are available to full-time workers in New York State.

When asked, Pearce acknowledged that finding a lawyer to draft a contract for every new client could be burdensome to freelancers, saying that one of the main goals of the proposed legislation would be to make it so that the client is the one held responsible when there is no contract in place.

Presently, there is no set timeline for a bill, but the group hopes to introduce legislation to the city council by the end of the year, and would like to see a law passed by early spring of 2016. In the meantime, it’s rallying support from its members, as well as from traditional unions like the American Federation of Teachers, the United Federation of Teachers, and SEIU 32BJ.

“It can be a long process, and it can also be a very variant process—but we’re optimistic,” Pearce said. “We really want to make sure there’s a robust law that protects freelancers up front so that they have a good work agreement from the outset and they have a recourse if something goes wrong.”

If nothing else, Freelancers Union’s campaign has been successful in drawing attention to the struggles many independent contractors have getting paid. They even managed to get on the radar of Barack Obama in early October.

At the White House for the Summit on Worker Voice, the president responded to a question submitted by Freelancers Union member and independent bookstore owner Sunday Steinkirchner asking what he will do to help freelancers get paid. Though President Obama had no immediate solution, he acknowledged the need to develop best practices and spoke briefly with Freelancers Union executive director and founder Sara Horowitz, who was in attendance at the town hall meeting.

When you’re able to get the attention of the leader of the free world, it’s safe to say your campaign is doing something right.

“That was so exciting and kind of a surprise to us,” Pearce said. “It’s not very often that you hear the White House or really anyone at a national political level talking enough about freelancers, so it was great just to have President Obama in the room engaged with Sara and Sunday.”