How Food Is Changing Co-Working Culture in Berlin

Plenty of co-working spaces offer perks like foosball tables, coffee machines, and funky communal spaces. But in Berlin, a city known for its local and activist food culture, co-working spaces are trying to appeal to people with a more tasteful benefit.

At spaces like The Agora Collective, Unicorn Berlin, and betahaus, food is at the center of creating truly communal co-working spaces. International chefs mingle with hungry freelancers, preparing locally sourced food with an eye on sustainability, quality, and community.

This culinary trend is a world apart from the sparse kitchens found in most co-working spaces—and that’s exactly how Berliners like it. 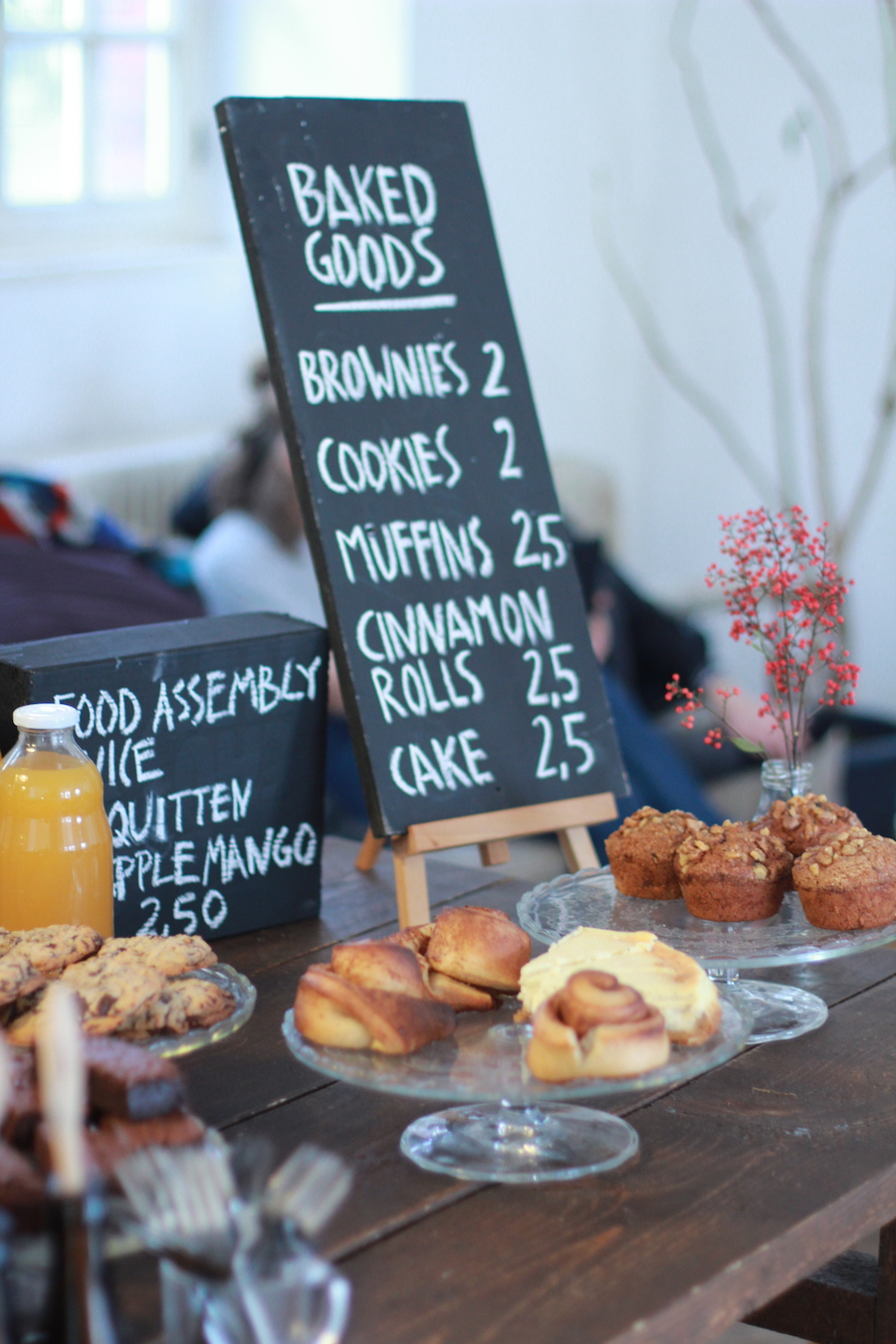 The Agora Collective is housed in a former lock factory in Neukölln, a borough in southeastern Berlin. Inside, workers have the choice to spread out across five floors of “vibrant” or “silent” areas as well as a bustling cafe on the ground floor.

Agora runs a cook-in-residency program, which means a new cook takes over the kitchen every three months. The initiative aims for the resident chef to not only create the daily dishes for the cafe, but also take part in workshops by guest artisans on topics like urban permaculture and fermenting foods. Additionally, chefs are also expected to come up with their own menu concepts. For example, previous resident chef Pepe Dayaw would base his daily menu around different themes like “sour fusions” and “sauces and stews.”

The current chef in residence at Agora is actually a team of three made up of artist and chef Asli Hatipoglu; Dani Berg, who is the Agora’s cafe manager; and a rotating stable of volunteers from Restlos Glücklich, a group that recently ran a successful crowdfunding campaign to open a new restaurant in Berlin that only sources ingredients from so-called “waste.”

Most of Agroa’s ingredients come from Luch Gärtnerei, a local organic farm, and The Real Junk Food Berlin, a voluntary organization that supplies surplus food that would otherwise be thrown out before it expired. In just one month, the cafe has already used over 700 pounds of rescued “junk food.”

In fact, The Agora Cafe is receiving so much produce from Real Junk Food that it’s turning to experts in fermentation and preservation like Edible Alchemy.

“They come every Friday and just go through everything extra that we have that can be pickled, brined, and preserved,” Berg told me. “We have a larder wall in the cafe where we’ll be rotating our house-made fermented foods and putting them up on display. We’ll also start regular fermentation workshops so the community can learn these skills and use them at home in their own kitchen.” 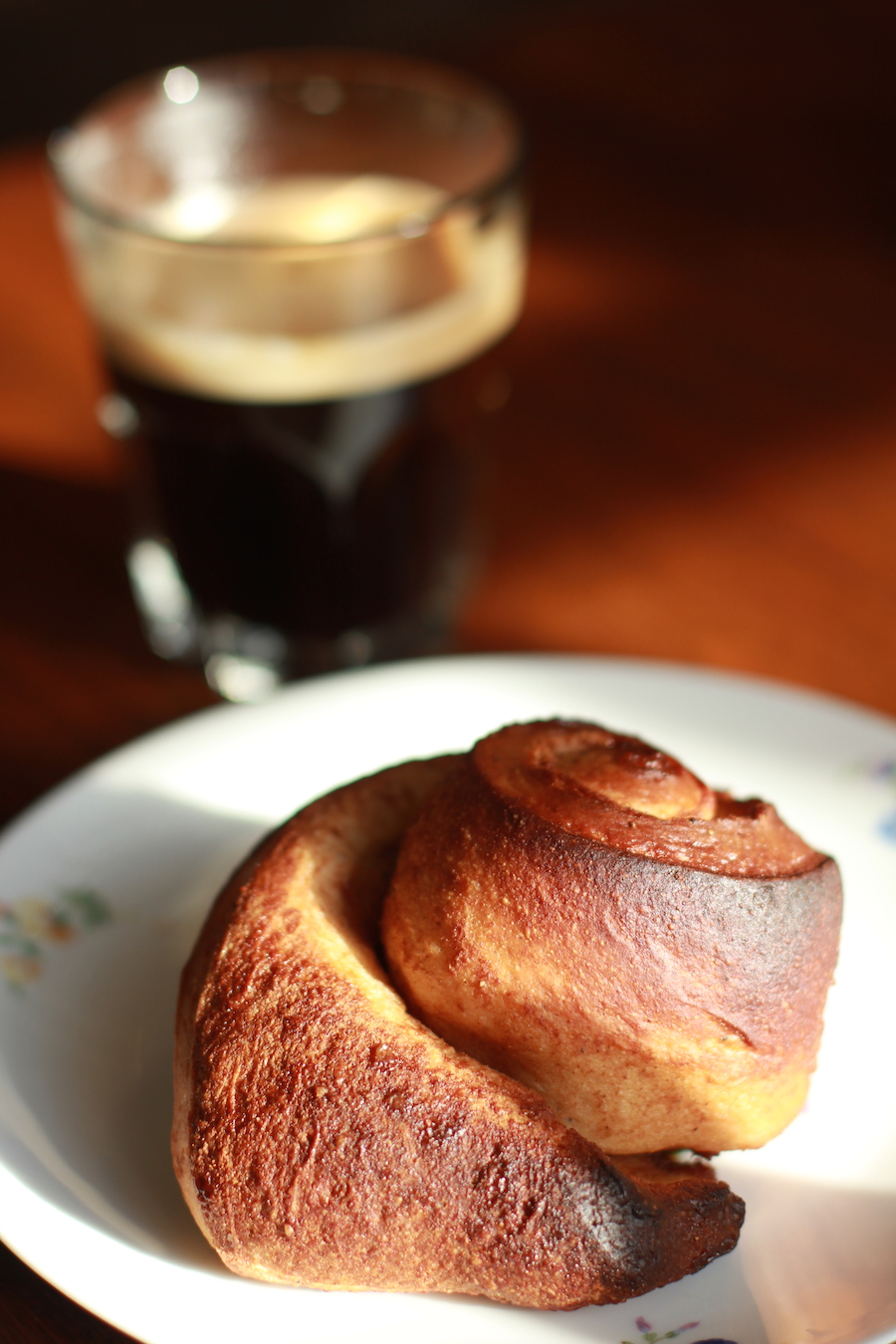 Agora’s sustainable food philosophy extends all the way to what its members eat at home as well. Agora is a collection point for Food Assembly, a program that connects local farmers and food producers to customers who place their orders online through the Food Assembly website.

Customers can shop for local produce from home and drop by the co-working space to collect their orders. Agora’s Food Assembly suppliers sell artisan and farm-fresh products like chocolate, jam, bread, honey, eggs, meat, and vegetables. And the online system means sellers only bring what’s been ordered, which helps cut down on food waste. 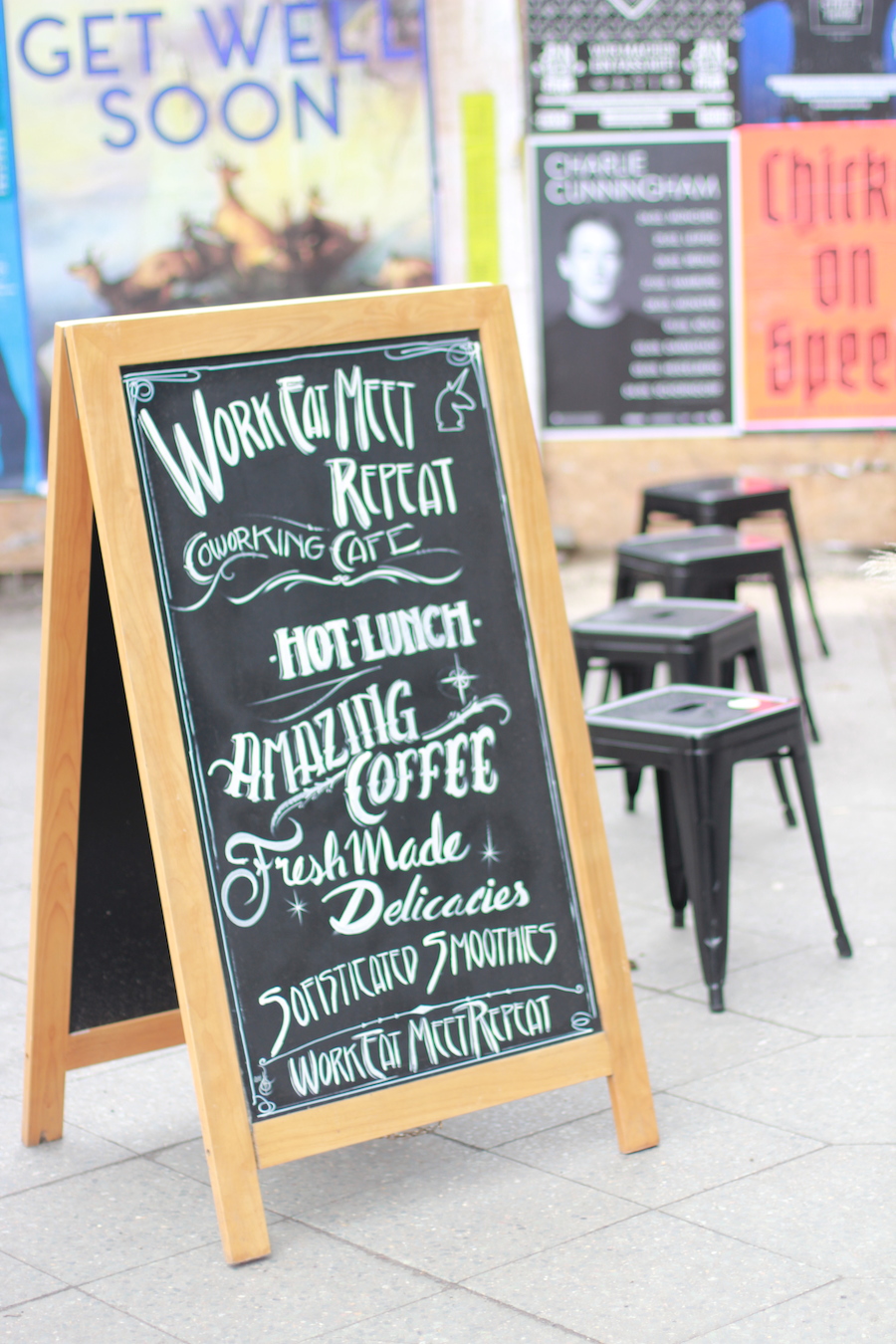 Unicorn Berlin is a recent addition to the co-working culture in Berlin, having opened in September 2015 a few doors up from the busy crossroads of Rosenthaler Platz in Berlin Mitte.

Unicorn’s aim is to serve high quality, plant-based food. The kitchen is managed by chef Jennara Santurio, whose background includes working for restaurants, bakeries, and cake shops in San Francisco.

Santurio soaked up as much food knowledge as possible before moving to Berlin and made a name for herself once she arrived, developing recipes for superfood cafe Goodies and the successful vegan supermarket Veganz.

At Unicorn, Santurio serves up superfoods and vegan dishes to her co-working customers. The cheese is made from cashews, sugar is replaced by agave, and puddings are set with chia seeds. 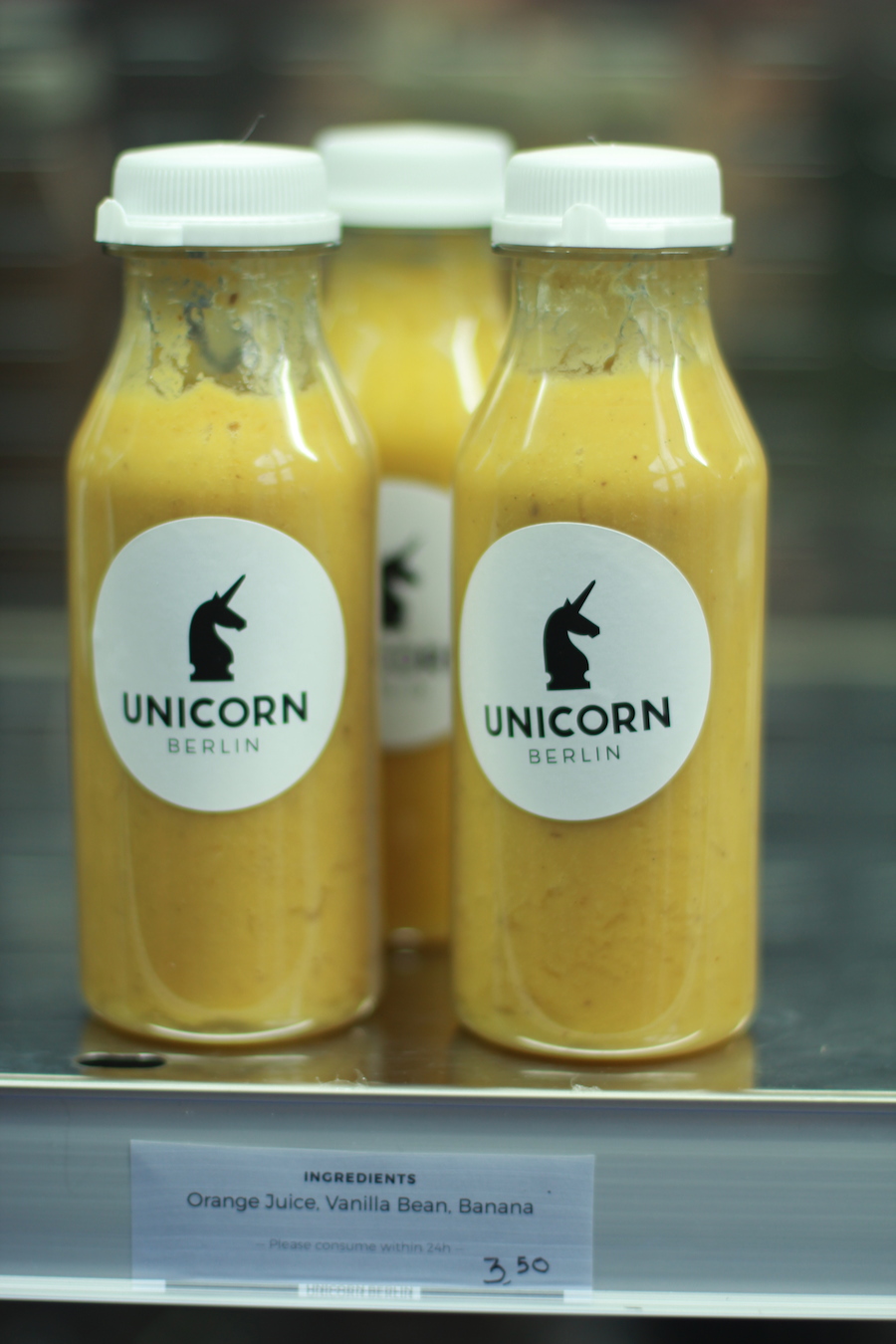 “It happens to be vegan, but that is not pushed in our advertising,” Santurio explained. “I use the best ingredients to my ability to create upscale mind- and body-empowering food that does not sacrifice in taste and appearance. I want all kinds of people to enjoy and judge my food first simply as food with no labels.”

Indeed, so many people enjoy the food at Unicorn that the space has started to offer take-out through local delivery services Deliveroo and Foodora. Orders come in biodegradable plastic containers, making it easy to grab and go or rent a desk if you’re going to work in the café for longer than an hour.

“There can be a negative stigma about vegan food, that it’s weird,” Santurio said. “[But] if it’s done correctly, it can be really delicious.” 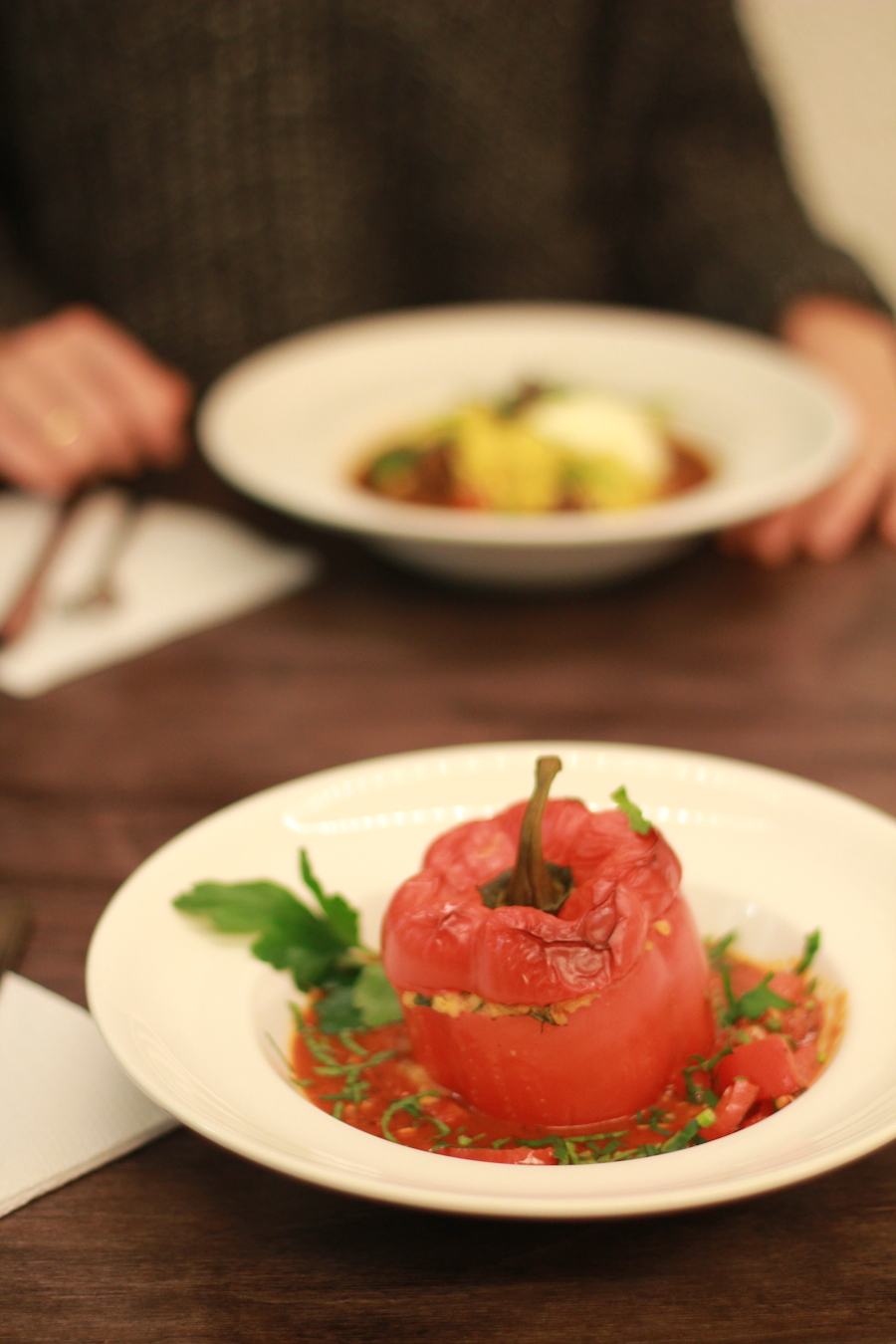 betahaus (the official spelling is lower-cased) is the big daddy of co-working spaces in Berlin. In fact, it’s Germany’s first ever co-working space, according to Alice Nell, betahaus’ brand manager. At a massive 64,000 square feet, betahaus contains six co-working spaces, event spaces, meeting rooms, a hardware lab, a wood workshop, and The Café.

The Café, which regularly caters outside events for high-profile clients such as Mercedes Benz and Ernst & Young, offers a menu that ranges from fresh baked goods and sandwiches to large lunch and dinner plates. Berlin-based drinks like Mother Kombucha stock the shelves, and the coffee comes from Coffee Circle, a startup that initially operated out of betahaus and gives back directly to Fair Trade development projects in Ethiopia. betahaus has even built a relationship with a local hunter who provides meat.

betahaus chef Sven Joswiak—whose previous experience includes Hugos and Weinbar Rutz, Michelin starred restaurants in Berlin—told me about the variety of producers that supply betahaus: “We have several different farmers that we work with. Recently we started a new project together with some farmers here in Berlin, a fish project here in the middle of the city. And last year, we worked with a farmer who has three hundred hectares of land—we got such a wide variety of vegetables from him.” 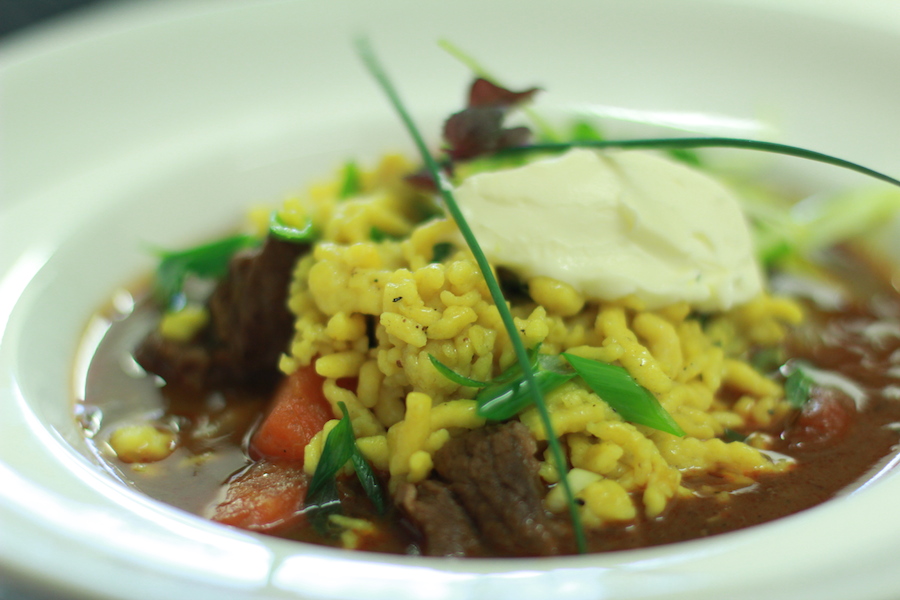 Because of its impressive relationship with food, betahaus often holds events like Sustainability Drinks, a meet-up that promotes sustainability in Berlin. And at the weekly betabreakfast gatherings, new products from the kitchen are often introduced to the community.

“We’re not only a co-working space offering food, we also keep a strong link between the co-working community and what we actually use in our kitchen,” said Cevahir Barut, the chief of food, beverage, and gastronomy. “The community is the most important thing, to get feedback and ideas from them. People come up to me and make suggestions or bring fresh ideas to make improvements—that’s what’s special here.”