6 Takeaways From the Katz & Kreuger Study on Freelancing

There have been a number of attempts to understand the scope of “the gig economy” in the United States. But things are complicated. For one, there’s no real standard terminology: what one study calls “the gig economy,” another refers to as “nonstandard employment,” and a third uses “alternative work.” It can get confusing, to say the least.

A March 2016 presentation by two famous economists—Lawrence F. Katz, a professor of economics at Harvard, and Alan Krueger, a professor of economics and public affairs at Princeton—split the difference. Titled “The Rise of Alternative Work Arrangements and The ‘Gig’ Economy“, the report digs in to some of the latest statistics on alternative work, dispelling myths while also raising important questions about the true size of the freelance workforce.

In order to see the changes that have taken place in the alternative work landscape over the past decade, Katz and Krueger conducted a RAND American Life Panel, which according to its website is “a nationally representative, probability-based panel of over 6000 members ages 18 and older who are regularly interviewed over the internet for research purposes,” in 2015. And in order to make the results comparable to their 2005 study, they used a standard set of questions called the “Contingent & Alternative Work Supplement (CWS),” which is used by the Bureau of Labor Statistics for their monthly Current Population Survey (CPS).

Their research differentiates between “online” gig work (conducted through third-party organizations like Uber) and “offline” gig work (contracted-out workers, independent contractors or freelancers, and workers at on-call or temporary staffing agencies). The difference between the various categories can be confusing, so I created a quick chart on draw.io to help clear up any confusion. 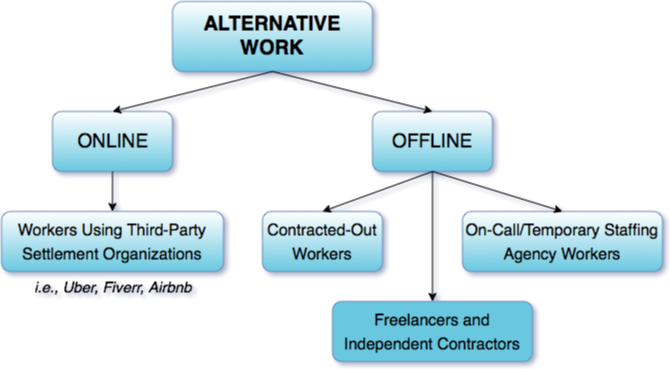 These cohorts of workers, though related in that they are all working outside of the traditional full-time paradigm, have distinct statistical footprints in the so-called alternative economy, which Katz and Krueger took care to capture.

Here are seven important takeaways from the study for freelancers.

One of the biggest findings in the study is that all employment growth in the U.S. since 2005 seems to be alternative work. It’s grown from 10.1 percent of all employment in February 2005, to 15.8 percent in late 2015. The change is significant because there was no comparable rise in the previous decade (between 1995-2005).

So are online platforms like Uber, TaskRabbit, Mechanical Turk, and their ilk behind the change? Not really. Despite the hype about online platforms disrupting the economy, offline alternative work is actually growing the fastest, jumping by 50 percent in the last ten years. A lot of this growth comes from companies contracting-out—as in, hiring workers through contract companies. These workers constitute a chunk of the workforce that has grown from 0.6 percent in 2005 to an estimated 3.1 percent in 2015.

Make no mistake: Online work is growing. Katz and Kruger estimate that there are about 600,000 online platform workers. They believe that Uber is the “quintessential employer of gig work,” representing anywhere from one-third to half of all online alternative workers.

2. Women, minorities, and the elderly are turning to alternative work

Though Katz and Kreuger use a small sample size, they found that alternative work is on the rise among older workers, women, and minorities. This trend coincides with findings that show women are more likely to be freelancers.

Roughly 10 percent of the changes to the alternative workforce can be attributed to age and educational shifts, with factors like a rising median age in the population, growing minority populations, and rampant youth unemployment in the wake of the recession bringing their own statistical baggage.

Independent contracting and freelancing is booming among older populations, as is alternative work in general. According to Upwork, baby boomers reluctant to retire at 65 may account for as many as 30 percent of all freelancers.

Younger workers, meanwhile, are turning to on-call or temp agencies. The proliferation of these unstable and unprotected positions—where workers can be classified as contractors rather than employees—corresponds with higher rates of youth and postgraduate unemployment.

Though freelancers and independent contractors benefit from hourly earnings that are 17 percent higher than conventionally-employed workers doing equivalent work, they typically receive 28 percent lower gross earnings since they tend to work fewer hours. People in the alternative economy are roughly twice as likely to be “involuntary part time.”

Contracted-out work, on the other hand, has no wage premium, which means younger workers taking on temp jobs—or otherwise working through a contract company —are suffering even more by usually working fewer hours.

4. Alternative work is growing for a lot of different reasons—not all of them good

The appeal of alternative work usually comes down to flexibility; people, particularly creatives, want more independence and time to pursue a variety of projects at their own pace.

From a macro perspective, however, the rise of nonstandard work can be seen as a consequence of the recent recession. Companies want to cut costs without impacting performance and the bottom line, so they are more likely to outsource or contract-out work in order to avoid paying benefits or offering workplace protections, part of a phenomenon that David Weil, the wage and hour administrator in the U.S. Department of Labor, calls “fissuring.”

Outsourced workforces are also increasingly being used to cushion core employees from demand shocks, or alternatively, to undercut wage negotiations (as with the Halifax Chronicle Herald newspaper in Canada contracting freelancers during the strike of their news staff).

5. Few studies agree on the number of alternative workers

Again, it mostly comes down to terminology: what is an alternative worker, and what is a freelancer? Each study or organization has a unique taxonomy, which can result in wildly different numbers.

Katz and Krueger estimated the gig economy—both online and offline—to be roughly 16 percent of all US employment. Online gig workers made up just 0.5 percent of that total. According to the presentation, however, the labor market is “evolving in ways not totally captured in official statistics.”

A 2014 study by the Freelancers Union and Upwork generously estimated the freelance workforce to be 34 percent of all workers. They expanded the category to mean anyone who does contract work, whether or not they have ever filed a 1099 with the IRS.

In the same year the Bureau of Labour Statistics (BLS) estimated that the “self-employed”constituted 10 percent of all workers, but neglected to exclude self-employed people with employees.

In a 2015 report, Lawrence Mishel of the Economic Policy Institute argued that both of the above surveys have significant methodological problems in defining who, exactly, should be classified as self-employed. The EPI estimated the true number to be a little less than eight percent.

Katz and Krueger note that the implications for worker’s rights and protections should be interrogated. Does the rise of gig-based employment chip away at or circumvent hard-won protections for a reasonable workweek, vacation and sick days, gender parity, and fair wages?

The report mentions that Harvard University has a possible institutional solution for offline alternative workers: the 2002 Wage and Benefit Parity Policy (WBPP). This policy stipulates that contracted-out workers—who perform retail, custodial, and security jobs (among others) on campus—should receive the same wages, benefits, and opportunities for advancement as Harvard employees doing equivalent work.

From a policy perspective, it’s difficult to simultaneously support innovation and economic growth while also protecting individual workers, who are caught up in what may end up being a sea change in labor relations.

Labor law reform affects all workers of every demographic and income bracket, not just freelancers. And with so much confusion and uncertainty, there probably won’t be a clear-cut solution anytime soon.