Journalism Has a Diversity Problem. How Can We Fix It?

Near the end of July, Twitter became just the latest tech company to release figures on the makeup of its workforce. Their diversity numbers—70 percent male and 78 percent white or Asian—were concerning and, unfortunately, not particularly surprising.

As Quartz reported last month, writing staffs for television shows are similarly uniform. And when it comes to newsrooms, the story is an old one. The percentage of minorities in newsrooms has remained stagnant at around 12 percent since 1994, Pew Research Center reports.

Back in 1978, that number was only 4 percent, which means over 16 years, minority representation in newsrooms tripled. So what happened? A lot of hard work, actually. Publications and journalists both stepped up to make newsrooms more diverse and inclusive, and they succeeded. And then stopped.

We need that effort now, once again. And it shouldn’t ever go away.

Rather than being behind the times, it’s clear a lot of media companies are completely of the times when it comes to lacking diversity. Thankfully, diversity is becoming a huge topic in the media once again, placing the pressure on companies to be transparent and active in their hiring practices.

The spotlight, in particular, is now on the world of journalism and media. The importance of a diverse newsroom has never been more apparent or more discussed.

A graphic put together by Vijith Assar at Scratch Mag shows how journalism leadership is just as—or more—homogeneous than tech or TV. At the top editorial positions of 24 English-language publications, there were a total of 1500 “man-years” of holding office, and only 36 of those years (the pink blocks) were led by women. The only person of color who shows up here is Dean Baquet, who took over for Jill Abramson at The New York Times just a few months ago. We all remember how well that transition played out. 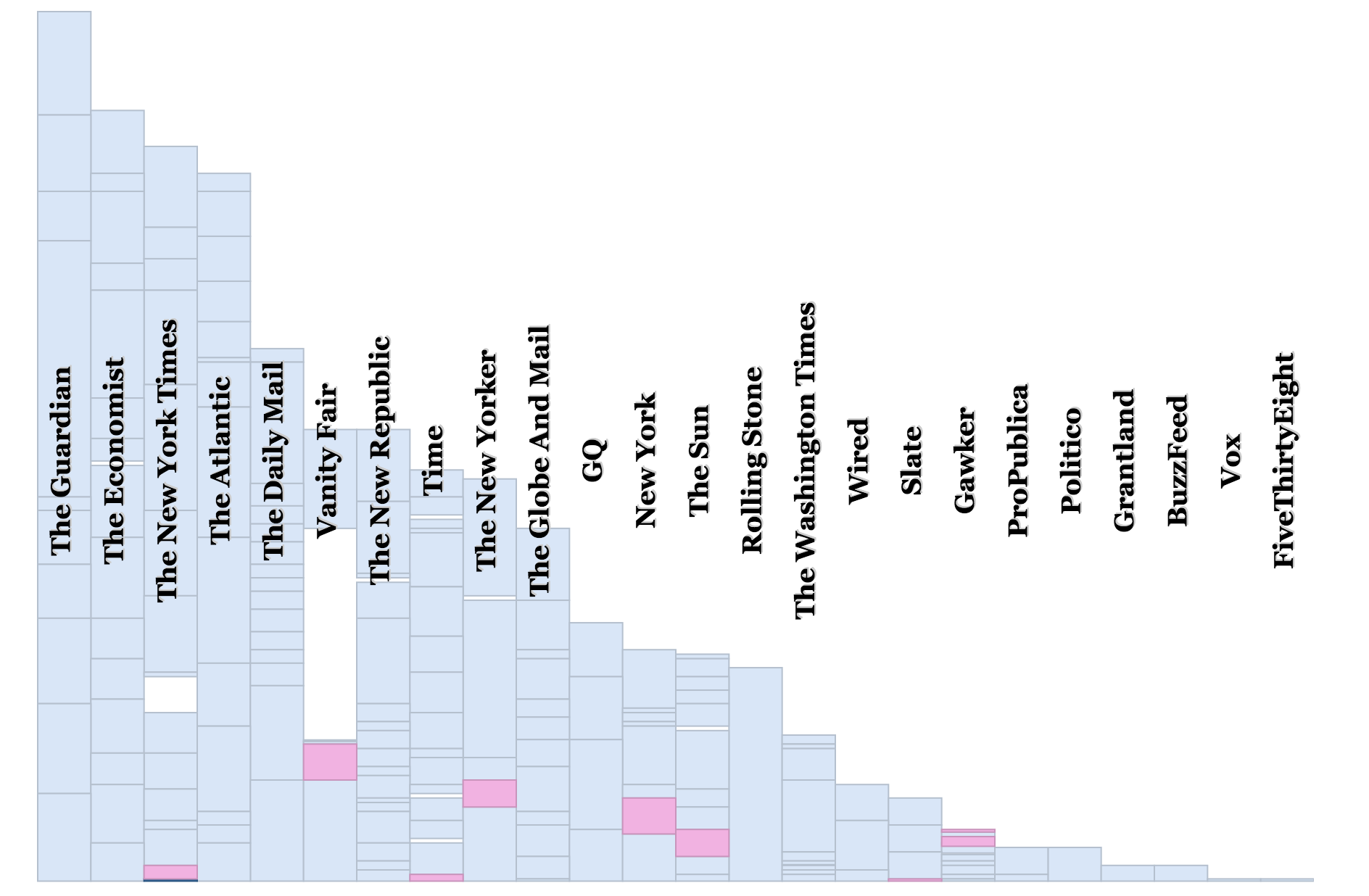 This graph only looks at the very top of the pyramid of editorial management. If we expand our sights to the top three editing positions, almost two-thirds of US newspapers had at least one woman there in 2013, according to Pew Research Center and the American Society of News Editors. However, only 15 percent of the newspapers polled said they had a person of color in one of those roles.

And when looking at all positions in newsrooms, women only accounted for 37 percent, while people of color made up 12 percent.

As Pew showed above, these numbers are not new. Diversity has either remained stagnant or, depending on the financial stability of the publication, taken a hit, with minority journalists suffering the most from the recent economic crisis. There’s a central lesson coming out of these discussions, as echoed by BuzzFeed deputy editor-in-chief Shani O. Hilton on Medium: Building a diverse newsroom is work, hard work. But it can, and should, be done.

“I think it’s important to have various perspectives in the newsroom when you’re discussing what stories you’re doing, how you’re covering them, and thereby how you’re educating the public about issues,” said Al Jazeera America interactive editor Lam Thuy Vo.

Vo, who is a member of the Asian American Journalists Association (AAJA), the Online News Association (ONA), and the Brooklyn Filmmakers Collective, said publications play an important role in shaping public opinion. Recognizing a variety of views is critical to this end. Publications write about what they know—and a mostly-male, mostly-white newsroom will be limited in the ideas it generates. Just look at television for an obvious example of underwhelming representation. The product is a result of who its creators are.

“Any newsroom in which the black staffer is expected to speak up for blackness while the white staffers only have to speak for themselves is a newsroom that’s failing,” Hilton wrote.

Vo put it more positively: In a perfectly diverse, utopian newsroom, “people from different backgrounds come with different biases and things they want to write about. I do think [diversity] does yield better results and leads to an environment where we all have different views and challenge our own views.”

Benét Wilson, board member for ONA and Vice Chair of Education for the National Association of Black Journalists’ Digital Journalism Task Force, said diversity makes for smart business as well. “The country is getting more minority-majority,” Wilson said. “There have been studies that minorities are using their mobile devices, tablets, to consume news, and if you give them a good product that reflects what they’re doing in their communities, people will consume that. Why not offer that to them?”

Building diversity from the ground up

“It actually isn’t easy to build a diverse newsroom,” Hilton wrote. “And there’s no way it could be. The main reasons are inherent to the structure of the news industry and the networks of the journalists and editors doing the hiring.”

When you’re looking at a traditional newsroom, wondering why it’s so old-hat, a gender- and race-inclusive work environment is not going to manifest itself overnight. Diversification must be active, and it must be continuous.

“It’s one thing to say you want to have it happen naturally, but I see people say that, and they’re not doing anything to facilitate that natural process,” Wilson said. “They’re sitting around waiting for people to fall into their newsroom.”

Luckily, Vo wrote us a guide. Her “game plan,” as she called it on Medium, presents steps to take and changes to make for publications to find, hire, and keep diverse talent. It’s not a cure-all, but it’s a start.

In fact, the game plan covers many significant demographics. In addition to racial diversity, Vo wants to see more “gender diversity, socioeconomic diversity—which includes class and income and how you grow up—and even LGBT diversity and people with disabilities.” All types of backgrounds and experiences contribute to a more well-rounded newsroom.

Start with networking, Vo suggested. Networks are powerful; they can either contribute to the stasis, or they can help get the ball rolling in the right direction. Changing the makeup of a newsroom requires serious outreach. Publications need to purposefully look for the diverse talents they want to apply, get the word out that they want diversity. The people Vo talked to agreed that there should be constant outreach, not just when jobs open up.

Expanding a pool of candidates likely requires a fundamental shift that opens doors for emerging journalists. Publishers can work with young journalists and offer paid—emphasis once again on paid—internships and fellowships. It would also help if employers used a more comprehensive and varied metrics system to evaluate how qualified someone is for a job.

“All of them are there and have been there for quite a while,” Wilson said. “It’s not like we’ve been hiding and not offering to be a resource.”

To make finding these journalists even easier, Wilson, along with then-Minneapolis Star Tribune reporter Emma Carew Grovum and others, created Diversify Journalism With Me in 2011. What originally began as a simple Google spreadsheet for digital journalists of color rebooted this month as a website offering curated profiles, where journalists can submit themselves or each other for inclusion on the list. 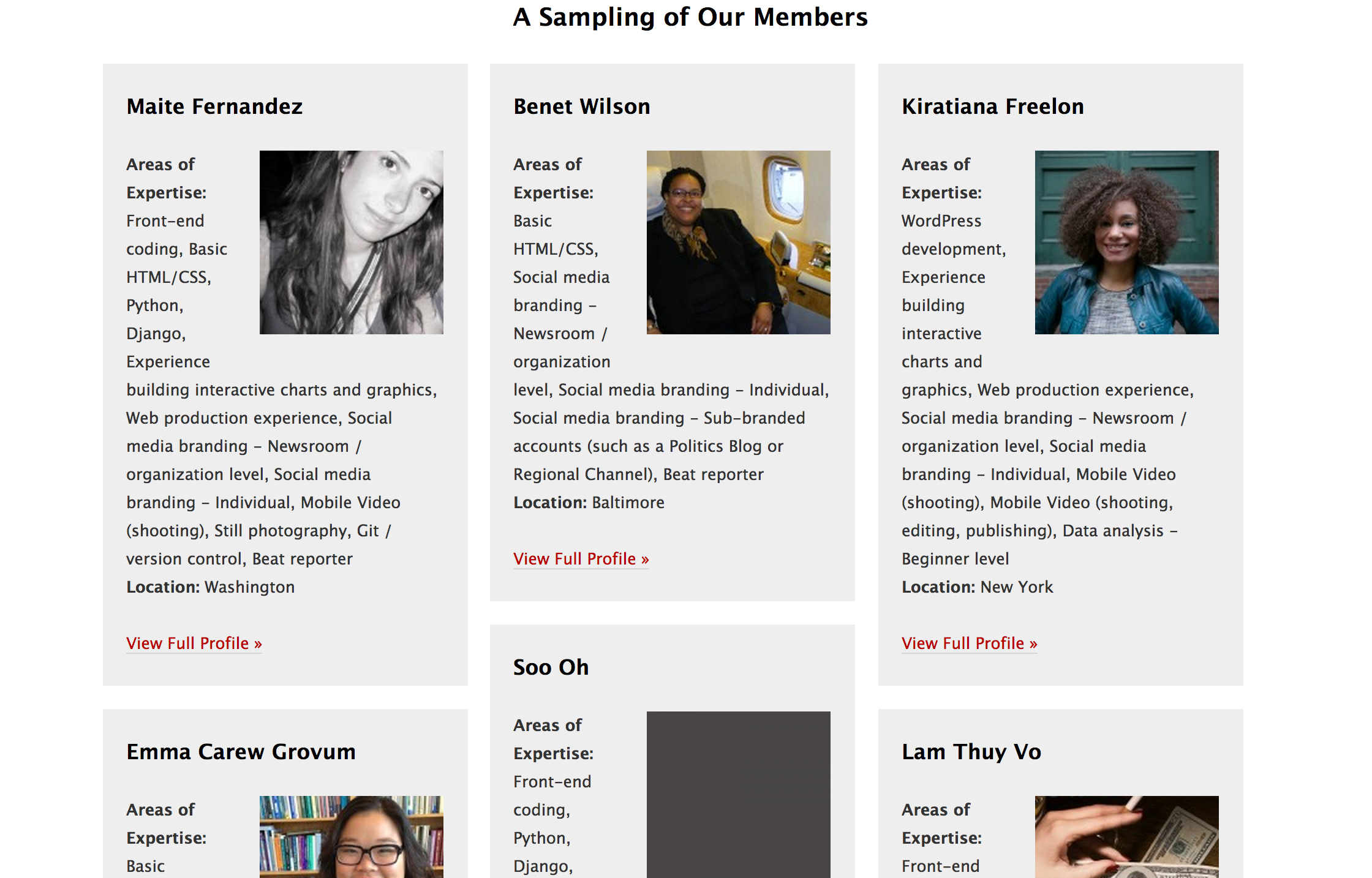 Image via Diversify Journalism With Me

And it wouldn’t hurt to make job listings like this one at The Toast, and be explicit in the search for diverse candidates: “Applicants who are queer and/or trans and/or of color and/or awesome are particularly encouraged to apply.”

Looking for a changing leadership

Diversifying the hiring process is just the first step. To bring newsrooms to a more representative level, diverse talent must also be retained and promoted. Achieving diverse management, however, is a much longer and more intensive process.

“People need to be given the opportunity to grow into management, they need mentors of all colors to help them navigate moving up to the next level, they need training, and they need people that will champion them to get up to that next level of management,” Wilson explained. “People also have to step up and say, ‘I want to do this.’”

Wilson and Vo both believe diversifying a newsroom will happen from the bottom-up.

“I do hear about things among women and minorities and among people who might feel like they’ve been marginalized in general,” Vo said. “Some groups feel imposter syndrome, like they’re not good enough to be somewhere, or they haven’t been groomed to be in those spaces.”

Making sure editorial meetings are spaces where people feel comfortable sharing varied points of view and opinions will benefit everyone involved, and in turn improve the quality of work being done at the publication. Sometimes, that just takes the initiative of one prominent person: Wilson and Vo spoke of mentors who were vocal about encouraging them to pitch ideas, take on more responsibilities, and try leadership roles.

When Vo joined The Wall Street Journal, English was her third language, after Vietnamese and German. Having her boss act as a constant cheerleader allowed her to grow as a journalist, but it also allowed her to move up the ranks in the company. “He hired me into the Journal and said, ‘This is great. Here’s ways to improve! Go, go, go!’ And I said, ‘I’m scared shitless! But you’re helping me a lot.’”

Wilson said some responsibility does lie with the journalists themselves to stay competitive, whether that means learning how to code, attending conferences, or self-promoting and fighting to take on new roles.

“Just keep up your skills,” Wilson said. “Never stop learning—and I’m saying this as a journalist who started her career on a manual typewriter. It is doable.”