When I moved to Montreal this summer, I set out on an ambitious café tour around the city. My goal? To build a network of coffee shops to replace the haunts I’d left behind while also learning about my new city.

Montreal is staunchly francophone, so it’s not too surprising that it has a thriving coffee and café scene (some would even argue that Montreal’s coffee culture is superior to its Parisian counterpart). While most of the city’s best coffee shops are clustered on either side of Avenue Saint-Laurent, you can find good ones pretty much anywhere.

When ranking what the city has to offer, I took particular note of factors like Wi-Fi, coffee quality, and how accepting employees were of long work sessions—the things freelancers need from a good coffee shop. By the end of my tour, I’d determined that these 10 cafés were the best of Montreal. 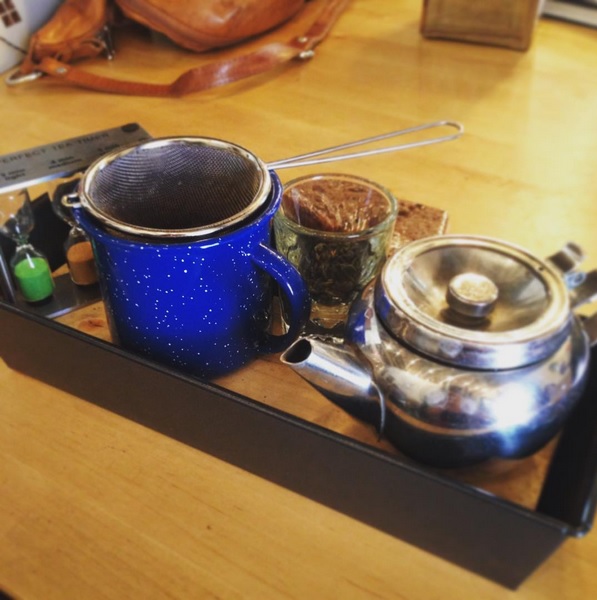 The cleverly named Oui Mais Non (Yes But No) is located at the north end of the plateau, past Marche Jean-Talon. This café has a charming, sunny vibe, while communal and single tables offer plenty of seating. Servers are particularly friendly, and there are plenty of people who camp out with their laptops for the afternoon—so no shaming stares from employees.

The seriousness with which this place takes its food and drink is illustrated by even the simplest cup of tea: Your order comes arranged like a science experiment, complete with timers and detailed instructions (see the photo above). The DIY flair adds that extra sense of ritual that often gets lost at a place like Starbucks. 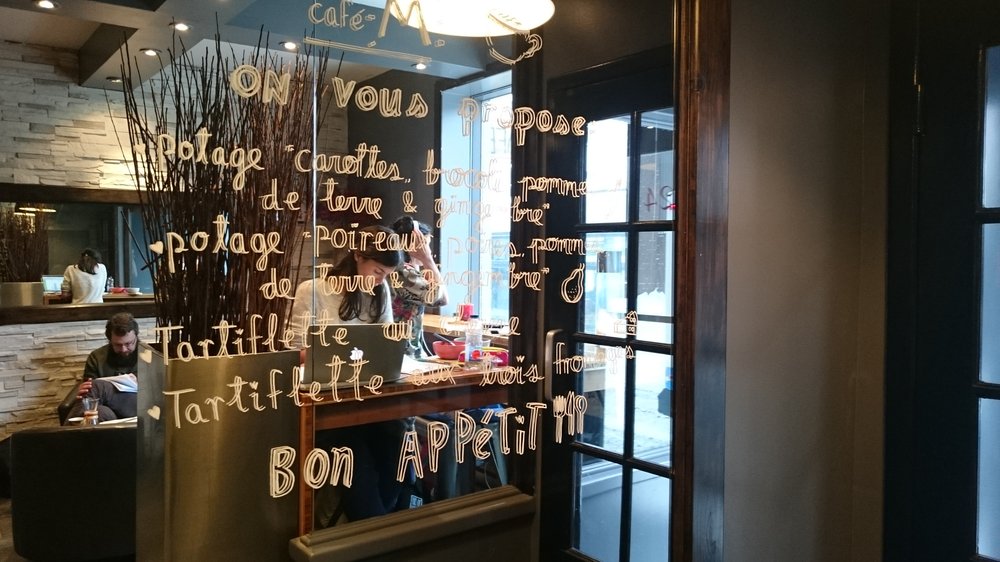 Vintage and industrial chic, Café M has wooden fruit crates in the windows and a collection of classic VW bus prints scattered about the walls. It’s small, but has plenty of seating, plus comfy chairs and stools at a counter along the front windows. The Wi-Fi and coffee are both excellent.

Of Montreal’s dueling 24-hour bagel shops—St. Viateur and Fairmount—Café M goes with Fairmount, so keep that in mind if you have a preference. The surroundings are a little tight for making calls, but the music, while energetic, is kept low. The only major downside is the uninspiring view of a windowless building across the street. 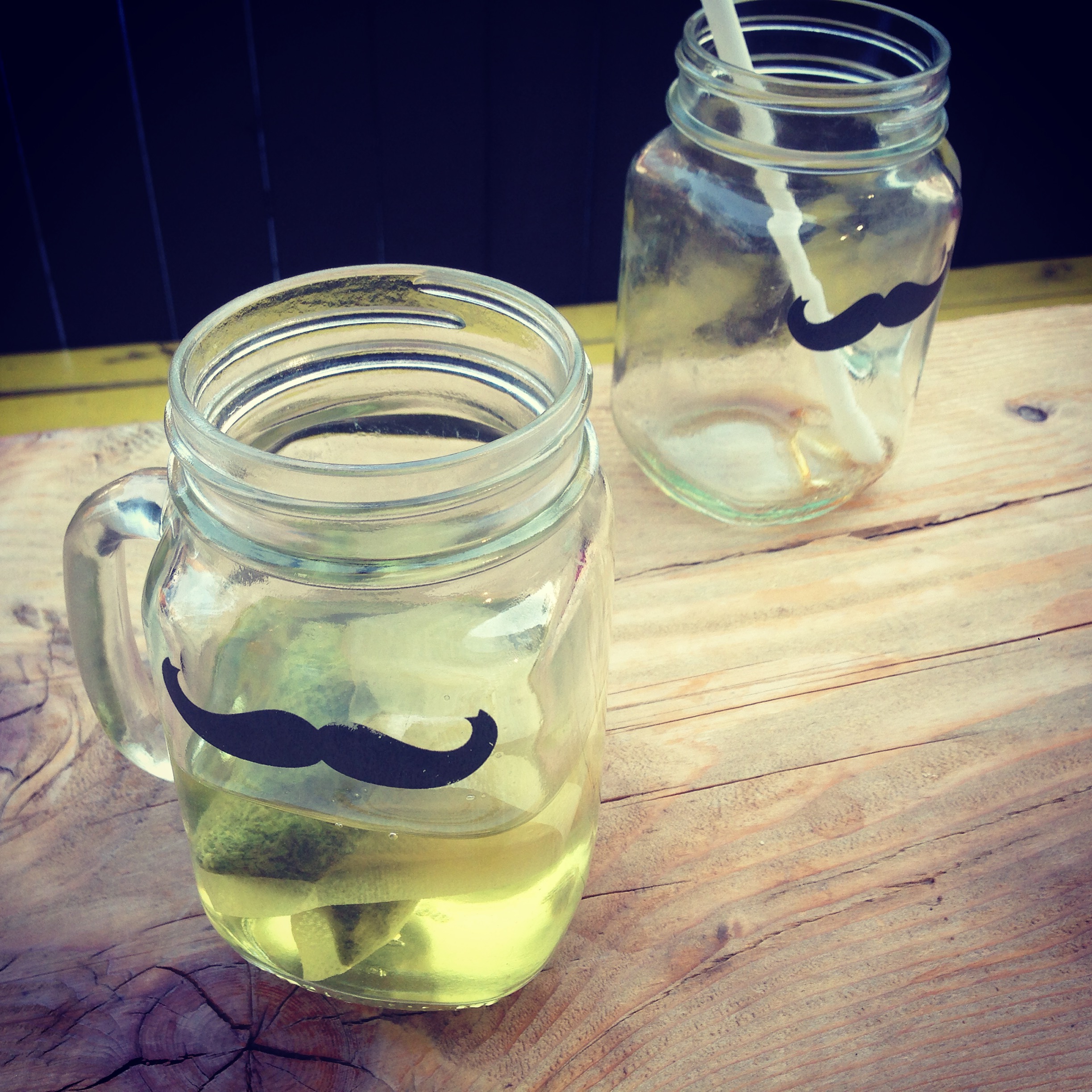 How hipster is Moustache Café? Your drinks come in mason jars emblazoned with a mustache. Seriously. Nevertheless, this place is fun, funky, and colorful, with great light streaming through the huge front window. And in case all of that wasn’t hipster enough, the counter is painted with another staple of the Portlandia set: birds perched on telephone wires.

In terms of utility for freelancers, Moustache is hard to beat. There’s always plenty of empty seats around the big central wooden table or at the smaller ones against the wall, and the indie soundtrack is kept at a fairly low volume. Food options include sandwiches with names like The Tom Selleck and Le Big Stache. And if you’re so inclined, you can even buy a mustachioed mason jar to take home, or choose from a selection of tempting coffee pots and mugs, and fair trade, organic coffee.

The wi-fi could be more reliable, but plenty of people park here for the day, so it’s not bad enough to scare away any serious café denizens. 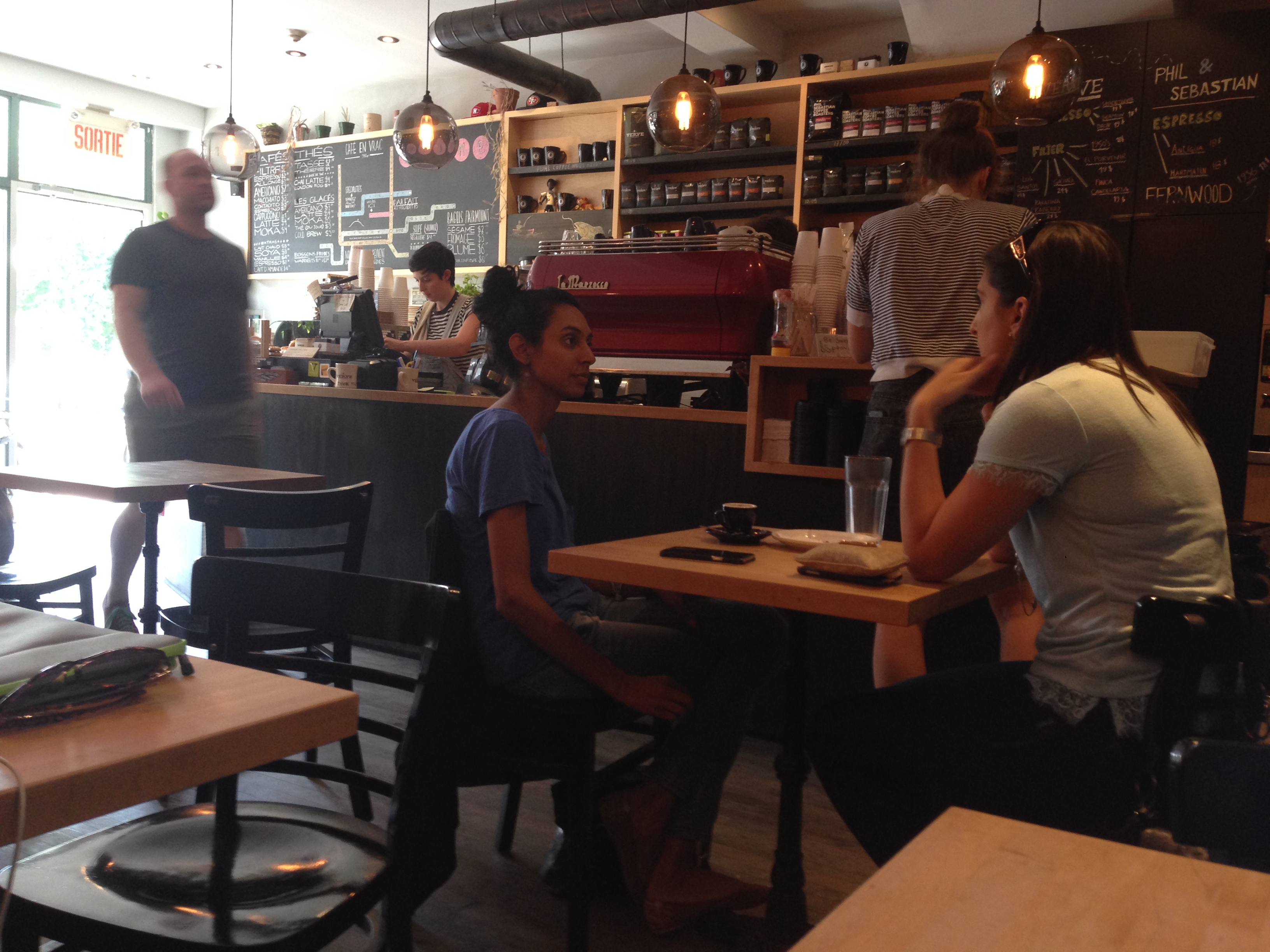 This place is perfect for snowy days—assuming you can find a seat. On the western end of the Plateau, the extremely popular Café Plume has a cozy vibe with exposed brick and sturdy little wooden tables. Unfortunately it’s popularity means it’s difficult to make it a consistent option, but if you’re in the area it’s always worth a try.

The espresso machine is loud, but the music is kept fairly low. There are plum seats and counter stools at the bay window, but there are also banquettes and standalone tables tightly packed in for maximum capacity. The café does a really busy trade in drinks and grub, or “bouffe” in French: including pastries and sandwiches. Wi-fi is free, but weekends are, unfortunately, laptop-free. 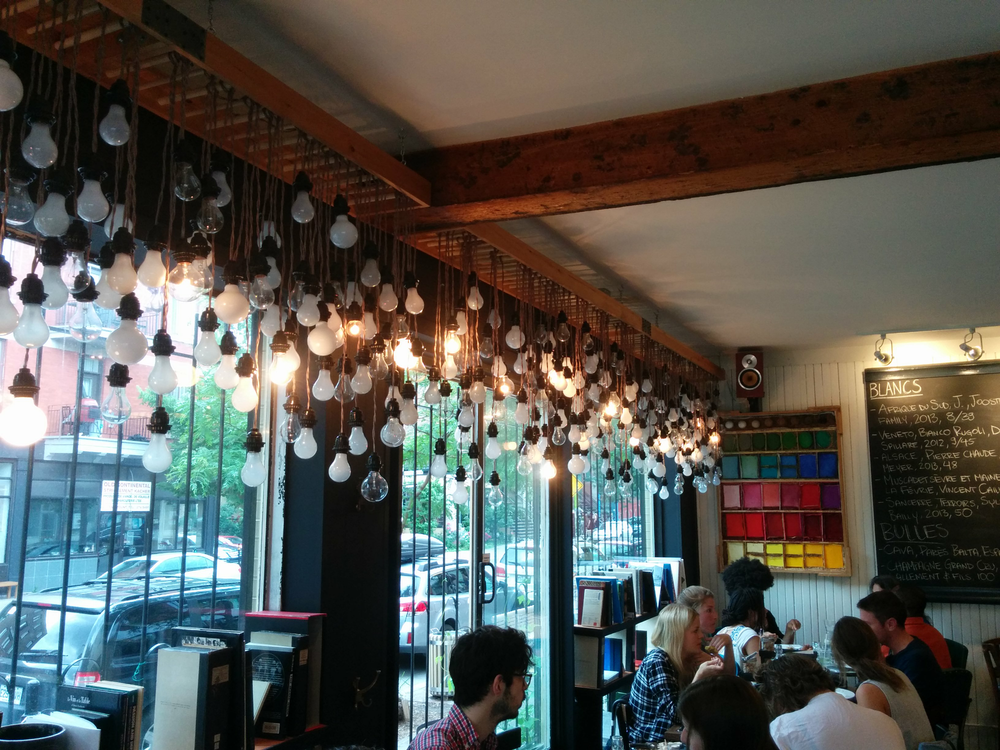 Arts Café is a charmer in the Mile End neighborhood. The classic, exposed-beam aesthetic is beautifully accomplished. Set on a corner, its two outer-facing walls are almost entirely windowed, and are overgrown with ivy on the outside and rows of varied light bulbs hanging on the inside. There are also shelves set against the huge windows with books on film, music, and architecture if you need inspiration (or distraction).

If you work better with a glass of wine than a coffee, or want to unwind at the end of a productive day, there’s a long, eclectic wine list on the giant chalkboard. Café Arts also has a full menu of delicious-looking food, plus baked good at the counter for a quick snack. If they have their strawberry scones, make sure to snap one up.

The main issue is lack of wi-fi. The shop doesn’t have its own wi-fi network, but one of their neighbors has a crawling but open network in case of emergency. This is probably a better place to focus on your reading and writing projects than research. 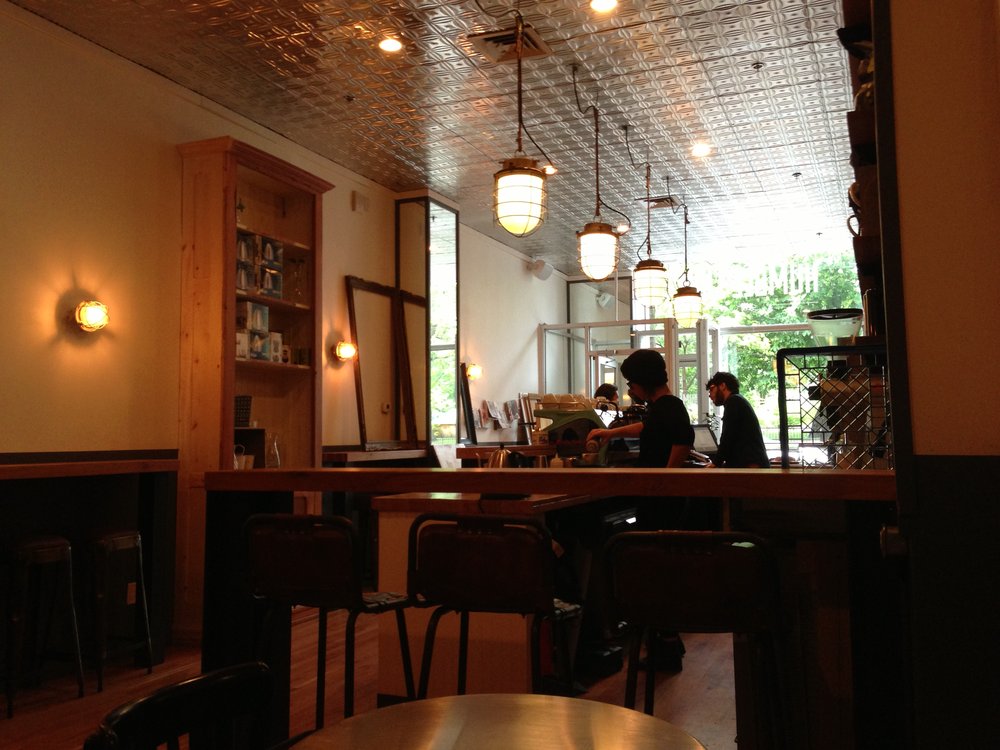 The main advantage at Humble Lion is the location, right across the street from the main gates of McGill University and, surprisingly, an oasis in a café desert. It can be hard to find a seat at peak hours, but if you do, the proximity to the anglophone McGill means you’ll hear a particularly rich mix of French and English, or perhaps my favorite: a conversation fluidly switching between both languages.

This café doesn’t offer a full food menu, probably because they don’t have enough space for all the people they could attract for lunch in this busy neighborhood, but offers a couple of interesting pastry options to go with your coffee, which is adequate if not outstanding. Luckily, they do have fast wi-fi. 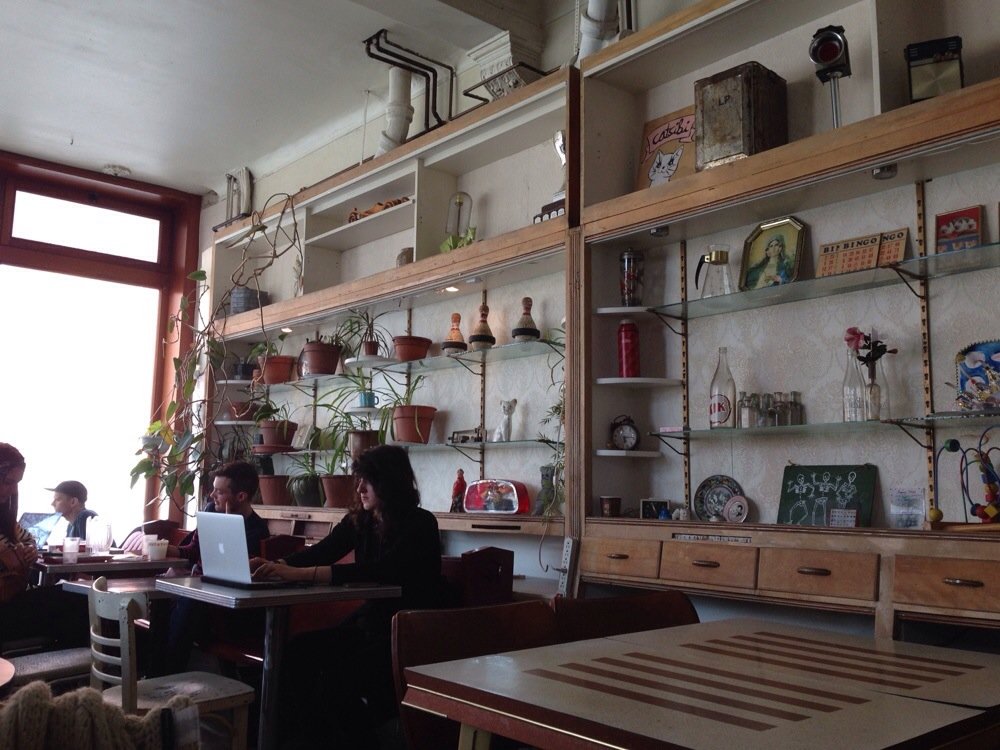 This Montreal institution turns into a concert venue at night, mostly featuring the latest hot indie bands. During the day, however, it’s another sunny, high-ceilinged café with a long menu of vegan options, including burritos and tacos with an unusual mix of fillings. The coffee itself is solid and inexpensive.

The décor is eclectic and perhaps a matter of taste. It feels a little like whoever outfitted the place raided a couple of particularly eccentric thrift shops. The front and back rooms offer plenty of seating—you can even take a seat on the small stage. The best news is that Cagibi is a member of the “île-sans-fils” network, which translates to the less aurally pleasing “wireless island.” This network of hotspots around the city offer free internet without a password. 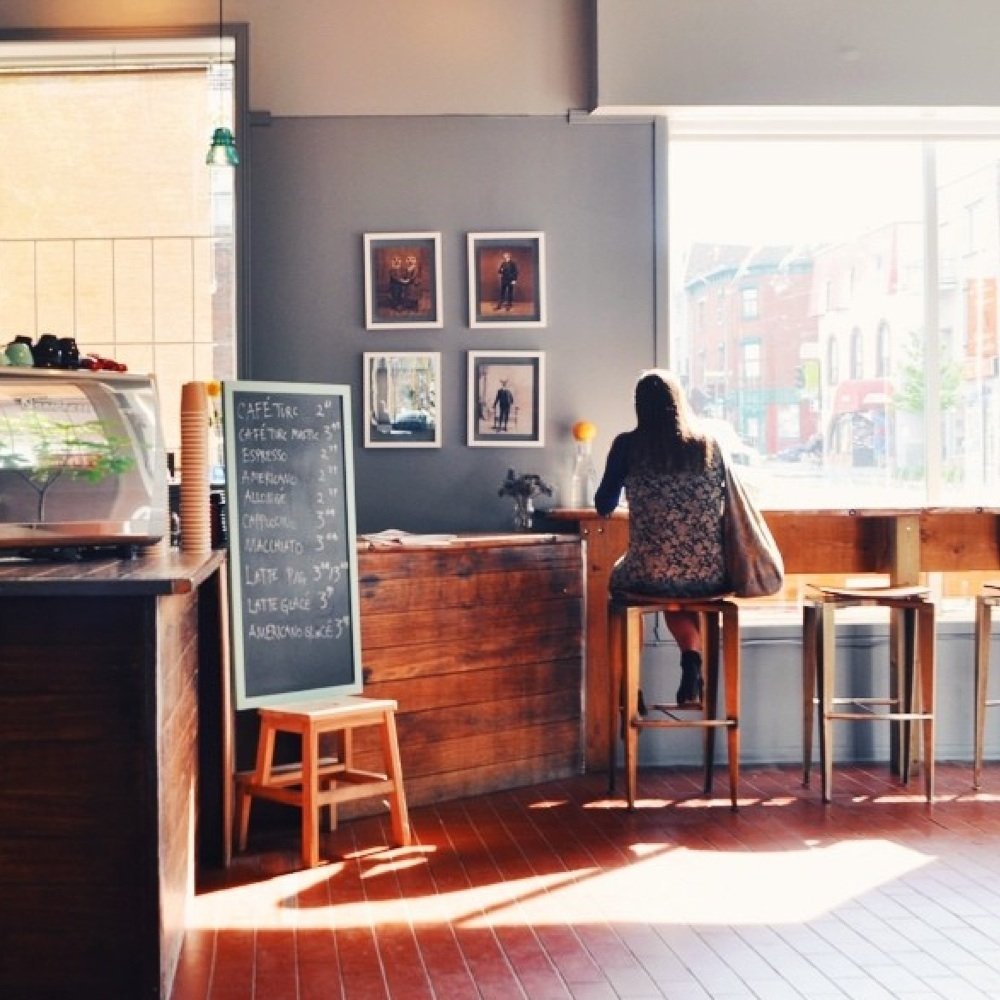 Popular with students and other laptop-toting denizens, Café Replika is the place to go to get work done in the company of focused peers—or hold a working lunch. Even for unproductive moments, there’s good people-watching to be had through the plate glass windows that look out on busy rue Rachel Est.

The vibe is unpretentious and cozy with communal tables and expertly mismatched chairs. This Turkish café has, of course, fine Turkish coffee and an eclectic menu. Like many of my favorites, this place has a high ceiling and lots of light—though it’s a little less successful at deadening the echo. Things can occasionally get a little loud, but the wi-fi is reliable. 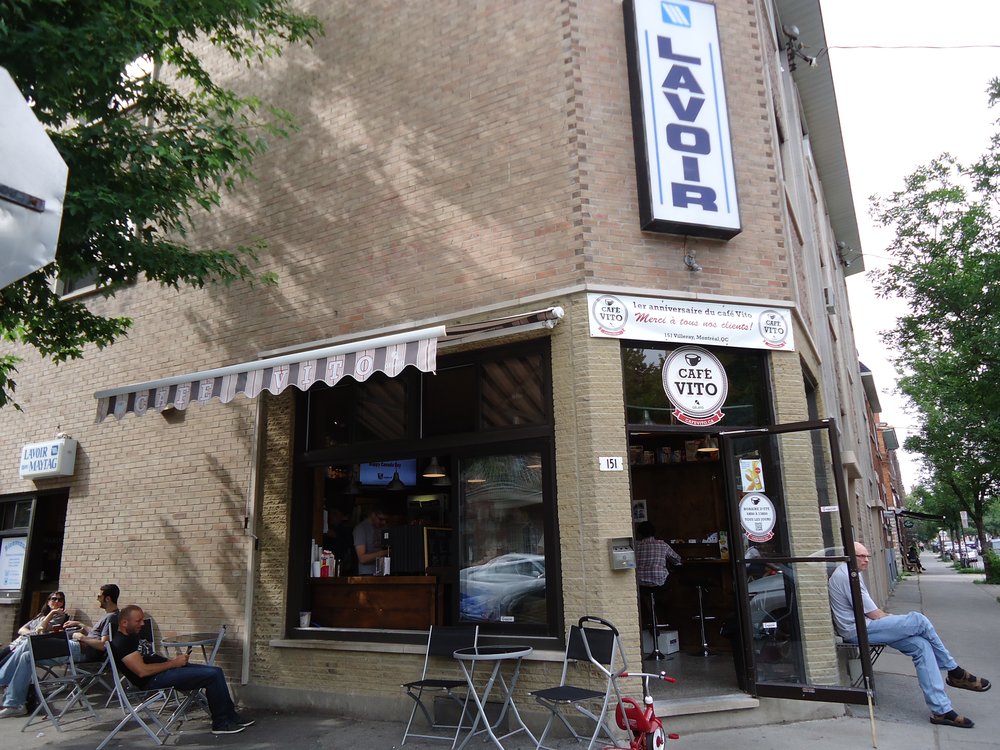 It’s hard to choose between all of the classic cafes in Little Italy, where groups of old Italian men seem to have all day to relax on the sidewalk terraces in summer or stage endless card games.

I’m going to cheat here and recommend at least walking by Café Italia, San Sebastien and Café Conca d’Oro for the most authentic taste of the neighborhood. However, Café Vito, a little north of Marché Jean-Talon, offers the best spot to get work done. A little to the north, it’s actually a relatively common Montreal hybrid: the café/laundromat.

The coffee shop half has a tiny enough storefront that I’m reluctant to share it for fear I’ll no longer be able to find a spot, but the small space allows easy eavesdropping on the owner Vito, who seems to know nearly everyone who walks in. This café does their iced coffee and tea the Italian way, poured over crushed ice. It’s also anglophone-friendly, and has excellent wi-fi to boot. 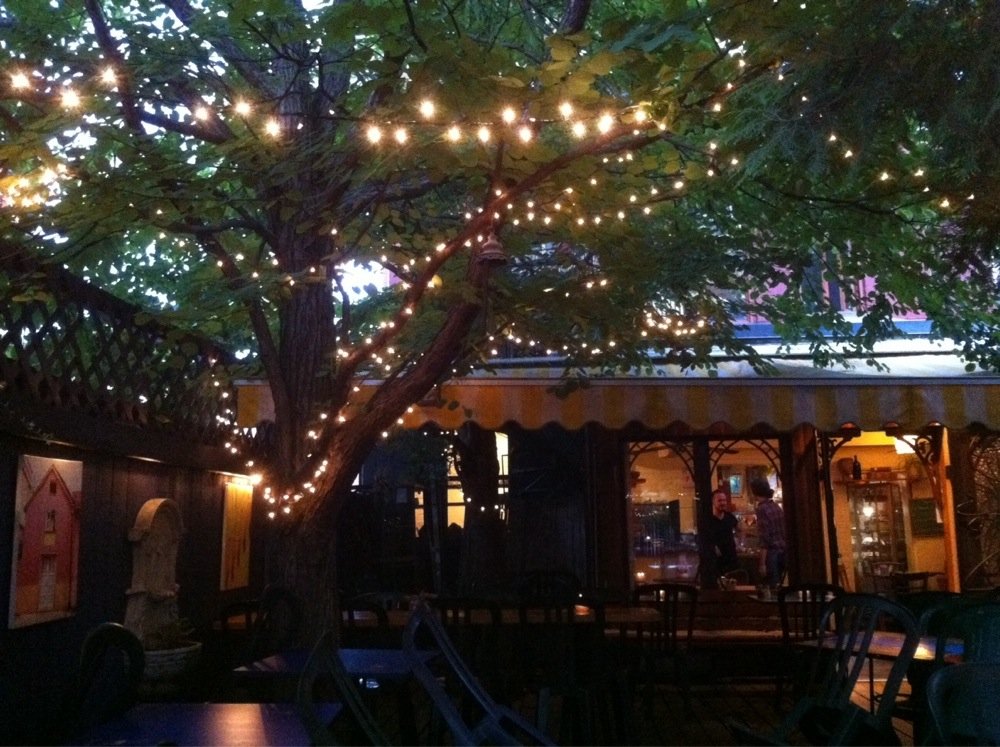 Image via Claire B. / Yelp

Santropol just has a little bit of that magical café ambiance, where it’s almost impossible to to walk by and not stop in. The aesthetic is comfortably worn-in, and has a slightly eccentric layout. This place is most known, however, for its excellent food. The sandwiches and salads are tasty and mostly vegetarian (you will also find things like tuna on the menu).

If you’re working on a laptop you may get directed to a side room where you’ll share a counter with other industrious souls, but make sure to take a book out on the terrasse, which built around a tree with a pond full of koi and has a very relaxed vibe.