Survey: Most Freelancers Are Unhappy with Their Income

Are you unsatisfied with how much you earn as a freelancer? If so, you’re not alone. That may not be all that comforting, but understanding where freelancers stand in 2015 is worth paying attention to as the economy evolves.

According to Payoneer’s “The Freelancer Income Survey” of over 23,000 people across 180 countries, only 46 percent of freelancers worldwide are satisfied with what they’re making.

The report states that freelancers work an average of 36 hours per week, and most tackle between one and three jobs at a time. So, what are freelancers being paid for these services, and why is it largely considered unsatisfactory?

The data suggests the average freelancer earns $21 per hour, amounting to a yearly salary of almost $40,000. As Business News Daily points out, this income is higher than the average wages of non-freelancers in most countries.

Since freelancing is such an umbrella term, the study broke results down into eight subsets ranging from programmers to writers. Regardless of the subset, the income satisfaction level for respondents was below 50 percent. Freelancers working for clients in IT & Programming and Legal reported the highest levels of satisfaction, at 48.7 percent. Meanwhile, freelancers who identified in the field of Writing & Translation have some of the lowest levels of satisfaction with their pay—43 percent. 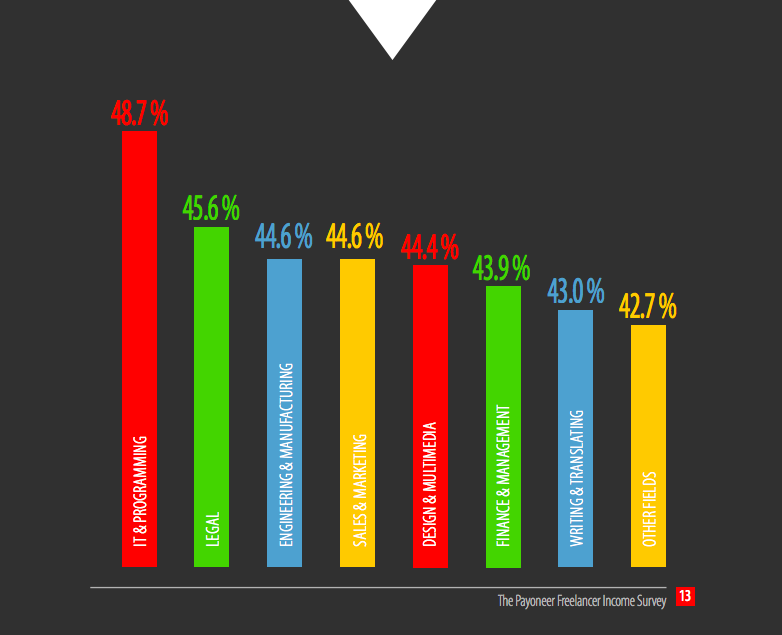 Still, these stats shouldn’t be too surprising, given that in the report freelancers who do legal work put in the most hours each week, and those in the writing world work the least. Additionally, freelancers who provide legal services charge $31 per hour—way more than the $17 per hour that writers and translators charge.

Sound meager? Only 18 percent of freelancers ask for over $30 an hour for their services, with almost half of the pool charging under $10.

Perhaps the most interesting find of the study is that freelancers with a college degree earn an average of $20 per hour, while those with just a high school education earn $22 per hour. As Jonny Steel, vice president of marketing at Payoneer, told Business News Daily, this data point suggests that companies hiring freelancers are more interested in experience than formal education.

“Not everyone has the same access to traditional higher education, but the beauty of the Internet is that as long as you’re connected, you have access to an almost infinite amount of knowledge,” Steel said. “So when it comes to making an impact on the freelance marketplaces, it matters a lot less where you acquired your skills from, as long as you can do the job.”

The issue here isn’t getting the job done; it’s getting compensated enough for the job.

If you’re interested in checking out the survey results in more detail, you can download the whole report from Payoneer here.